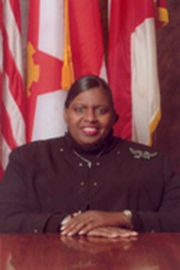 Miriam Denise Witherspoon (born c. 1960 in Mobile - died April 21, 2009 in Birmingham) was an attorney and representative for District 7 in the Birmingham City Council.

Witherspoon, daughter of McKinley Dan and Claretha Witherspoon, was born and raised in Mobile. She had a degree in political science and history from Alabama A&M University and graduated 2nd in her class at the Miles Law School. An auto accident in 1988 injured her spinal cord and left her wheelchair-bound. She began practicing law in 1990, with a specialty in senior citizens and disability issues. She was the executive director of Senior Citizens Services of Alabama. She also served as the Attorney for Senior Citizens in Jefferson County and maintained a private practice in probate law up to her death.

She was first elected to the City Council in the 2005 Birmingham City Council election over six opponents for the seat vacated by Bert Miller and was still in office when she died. On the Council she served as President Pro Tempore. She also chaired the Public Improvements Committee and was a member of the Administration, Budget and Finance Committee.

On the council, Witherspoon took a leadership role in promoting city-wide compliance with the Americans with Disabilities Act (ADA). Upon her election the Council chambers were immediately retrofitted to make them accessible for her. She sponsored the Birmingham Visti-ability Ordinance mandating disabled access in neighborhoods across the city. She proposed and later withdrew a 120% pay increase for council members in 2008.

Witherspoon was the first African American to be honored as "Miss Wheelchair Alabama". She was also a life-long member of Alpha Kappa Alpha Sorority and a member of Bethel A.M.E. Zion Church in Brighton.

Witherspoon had given no indications she was ill during an April 20, 2009 committee meeting, but called a friend a few hours later saying she felt ill and asked to be taken to the hospital. She was taken to St Vincent's Birmingham where she died early the next day. It is believed she had an advanced infection she hadn't noticed due to her paralysis, which her body was unable to overcome.

Mayor Larry Langford ordered flags be flown at half mast in her honor. He also asked that Lamar Outdoor Advertising provide a free spot on their electronic billboards honoring her memory on the day of her funeral, which the company agreed to do. Viewings were held April 23 at St John A.M.E. Church and just before the funeral on April 24 at Greater Shiloh Missionary Baptist Church. Witherspoon was buried in her hometown of Mobile.

Shortly after her death, the Council unanimously approved Mayor Langford's proposal to name the proposed athletic complex at Fair Park in her memory. The board of the Birmingham Public Library later named the reading room at the Powderly Library for her as well.

Jay Roberson was seated as her replacement shortly after winning the runoff following the 2009 Birmingham City Council election.