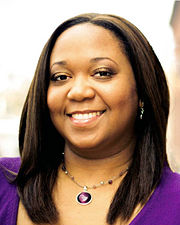 Stricklin moved to Birmingham with her family when she was 8 years old. She was inspired by re-runs of "A Different World" to attend college. She enrolled at Alabama A&M University, but transferred to UAB, where she majored in music with a concentration on vocal performance.

Stricklin turned to writing seriously in 2003 with the novella Her Name is Deceit. She has since published six books and written numerous songs and poems. She has also written and produced three short films. Her first, "Detour", debuted at the 2010 Sidewalk Moving Picture Festival. She followed that a year later with "Time Calls", which screened at the 2011 Sidewalk Festival. She shot The Hop Off, starring Kadeem Hardison, at Woodlawn High School as part of the annual On the Set Summer Film Camp for students and wrote a screenplay for a full-length feature entitled "Beautiful Disaster".

In addition to writing and filmmaking, Stricklin was an accomplished artist. An selection of her paintings were exhibited at the Birmingham Civil Rights Institute in Spring 2012.

Stricklin was killed in July 2012 when her car left the interstate and struck a tree.