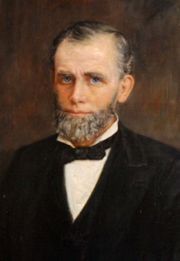 Lupton, the son of Nathaniel and Elizabeth Hodges Lupton of Virginia, studied at Newark Academy in Delaware. He enrolled at Dickinson College in Carlisle, Pennsylvania in 1846 and graduated in 1849, intending to pursue a legal career. Instead he accepted an offer to join the faculty of the Aberdeen Female College in Mississippi as a professor of chemistry. The following year he moved to a similar position at Petersuburg College in Virginia. After a year there, he was chosen as the college's president for two years.

In 1856 Lupton joined the faculty of Randolph-Macon College in Ashland, Virginia as a chemistry professor. He accepted an offer to move to Alabama and create a chemistry program at the newly-opened Southern University in Greensboro, Hale County beginning in 1859. During 1858 he traveled to Europe to secure equipment and to study under Robert Bunsen at the University of Heidelberg.

During the Civil War, Lupton served with the Confederate Nitre and Mining Bureau, which produced gunpowder in Selma until it was destroyed by Union troops in 1865. Lupton returned to his teaching post until he was named chair of chemistry and fifth president of the University of Alabama in 1871, charged with overseeing the first steps toward the rebuilding of its war-damaged campus.

Lupton left Tuscaloosa to serve as professor and head of the School of Pharmacy at Vanderbilt University in Nashville, Tennessee. He returned to Europe to secure supplies for that department's laboratories and attended the Congress of Orientalists in London in 1874. He returned to Alabama in 1885 to become a professor and State Chemist at the Alabama Polytechnic Institute in Auburn and remained at that post until his death at age 62. During that period he published several works on the use of organic phosphates as commercial fertilizers. He is buried at Pine Hill Cemetery in Auburn.