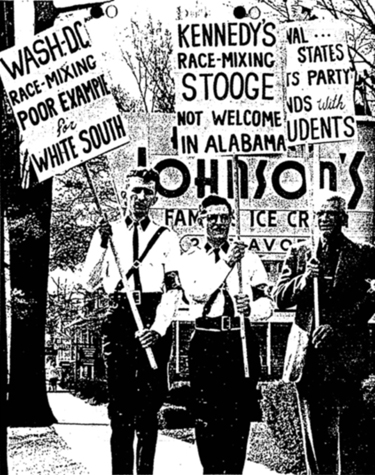 An NSRP demonstration in the 1960s

The National States Rights Party was an anti-integrationist and anti-semitic activist group and neo-Nazi fringe political organization active from the 1950s to the 1980s. It was founded in 1958 in Knoxville, Tennessee by Edward Fields and J. B. Stoner, but moved its headquarters to a house at 1865 Bessemer Road in Birmingham's Central Park neighborhood in 1960. The headquarters moved to Savannah, Georgia in 1965.

Politically, the party nominated Arkansas governor Orval Faubus for president in the 1960 election. Four years later, they supported activist John Kaspar for the office. Neither candidate received as much as 1/10th of a percent of the popular vote.

Fields published a monthly party newspaper, the Thunderbolt which reached a peak circulation of 30,000 in the late 1960s when the organization boasted chapters in 16 states, though the FBI estimated its actual membership at closer to 100 people. The group made itself visible at rallies and protests in a uniform of white shirts, black pants, black tie and a Nazi thunderbolt-emblazoned armband. The group hung an effigy of Martin Luther King, Jr from a tree in front of its headquarters. 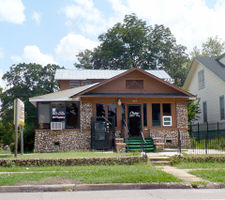 Besides its superficial political activities the NSRP was deeply involved in anti-integrationist violence. Stoner was convicted of his involvement in the 1958 bombing of Fred Shuttlesworth's residence in Collegeville and in the bombing of the Atlanta Reform Temple synagogue in Atlanta, Georgia. The group was also heavily represented during the beating of Freedom Riders on May 14, 1961 at Birmingham's Trailways terminal, after Bull Connor himself told the group it was unwelcome in the city.

As anti-integration passions waned in the South, the group took up the cause in neo-Nazi rallies in the U.S. and Europe. The NSRP began a steep decline in the mid-1970s as Fields involved himself more closely in the Ku Klux Klan. Stoner's 1980 conviction for the Shuttlesworth bombing further weakened the group, which effectively ceased to exist by 1987.