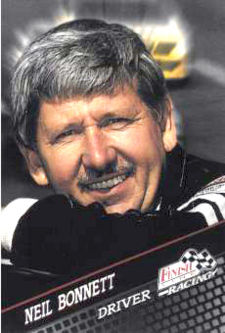 Neil Bonnett began his NASCAR career as a protégé of the great Bobby Allison, working on the team's cars. He later became part of the famous "Alabama Gang" that included himself, Red Farmer and the Allison family: Bobby, brother Donnie and, later, son Davey. He began driving in NASCAR in 1974 and earned his first victory in 1977 at the Capital City 400 in Richmond, Virginia. He later successfully won back-to-back World 600s (NASCAR's longest race, now the Coca-Cola 600) and back-to-back Busch Clash (now Bud Shootout) victories.

He appeared in the 1983 Burt Reynolds movie Stroker Ace.

In 1984, Bonnett joined the powerful Junior Johnson team, becoming a teammate to Darrell Waltrip. In 1985, Bonnett had one of his best seasons, finishing fourth in the points standings while Waltrip went on to win his third championship.

Bonnett participated in International Race of Champions (IROC) during three seasons (1979, 1980, and 1984), and finished second twice.

On April 1, 1990, Neil Bonnett suffered a life-threatening crash during the TranSouth 500 at Darlington, South Carolina. Left with amnesia and dizziness, Bonnett retired from racing and turned to television, becoming a race color commentator for TNN, CBS Sports, and TBS Sports, and hosting the TV show Winners for TNN.

However, Bonnett still desired to continue racing. In 1992, he began testing cars for good friends Dale Earnhardt and car owner Richard Childress. Cleared to race again in 1993 and upon Earnhardt's suggestion, Childress gave Bonnett a ride for the 1993 DieHard 500 at Talladega Superspeedway. But Bonnett's comeback race was marred by a crash in which his car spun, became airborne, and crashed into the specator fence. Bonnett was uninjured and actually called the rest of the race from the CBS broadcast booth. He would also start the final race of the 1993 season in Atlanta, but he dropped out after just three laps. The reason the team gave for removing the car from the race was a blown engine, however Bonnett was teamed with points leader Dale Earnhardt, and the car was retired to assist Earnhardt in winning the season's championship. Earnhardt needed to maximize his finishing position, and by Bonnett quitting the race he was assured of those three championship points.

Despite the setbacks, Bonnett was encouraged because he had secured a ride and sponsorship for at least six races in the 1994 season with car owner James Finch, including the season opening Daytona 500. But on February 11, 1994, during the first practice session for the Daytona 500, Bonnett's car suffered a right front tire failure in the track's fourth turn. Bonnett's car hit the outside wall nearly head-on. Bonnett was taken to nearby Halifax Medical Center, but he had died on impact. He was survived by his wife, Susan, and their two children, son David Bonnett and daughter, Kristen. In a tragic twist of irony, Bonnett's close friend Dale Earnhardt was killed in an almost identical crash in the same location on the same track in 2001.