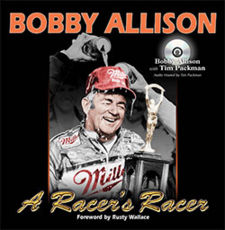 Bobby Allison (born December 3, 1937 in Miami, Florida) was a NASCAR championship driver and was named one of NASCAR's 50 greatest drivers.

Allison entered his first race as a senior in high school, but was ordered to quit by his father after a few accidents. After high school in 1959, Allison took his brother Donnie and some friends along on a quest for more lucrative racing than was available in south Florida. His searching led him to the Montgomery Speedway in Montgomery, Alabama, and he was told of a race that very night in Midfield. Allison entered and won that race, along with two others races that week. He had found his lucrative racing. Bobby and Donnie set up shop in Hueytown with another friend (Charles "Red" Farmer), and they began answering to the name Alabama Gang.

Bobby Allison also worked as a mechanic and an engine tester, but eventually came into his own as a driver and won the national championship in the modified special division in 1962.

He moved to the Grand National circuit in 1965 and got his first victory at Oxford Plains Speedway on July 12, 1966.

During the course of his career, Bobby Allison accumulated 84 victories, which ties him for third all-time with Darrell Waltrip, including three victories at the Daytona 500 in 1978, 1982 and 1988, where he finished one-two with his son, Davey Allison. He also won the NASCAR Winston Cup Championship in 1983. Additionally, Allison ran in the Indianapolis 500 twice, with a best finish of 25th in 1975.

On June 19, 1988, Bobby Allison nearly died in a crash at Pocono Raceway, but was left with injuries that forced his retirement from NASCAR. He was elected to the International Motorsports Hall of Fame in 1993, tragically, the same year that his son Davey died in a helicopter accident at Talladega Superspeedway. He was inducted into the Motorsports Hall of Fame of America in 1992.

Allison is one of eight drivers to have won a Career Grand Slam, by winning the sport's four majors; Richard Petty, David Pearson, Darrell Waltrip, Dale Earnhardt, Jeff Gordon, Jimmie Johnson, and Buddy Baker are the other seven to have accomplished the feat.

Officially, according to NASCAR.com, Bobby Allison has won 84 races, placing him in third place on the all-time wins list, tied with Darrell Waltrip. Unofficially, Bobby Allison has won 85 races, and should be possibly be credited with 86 wins. The controversy lies in two races: the 1971 Myers Brothers 250 held at Bowman Gray Stadium (Winston-Salem, North Carolina), and the 1973 National 500 at Charlotte Motor Speedway. (Charlotte, North Carolina.)

The 1971 Myers Brothers 250 was held on August 6 at Bowman Gray Stadium in Winston-Salem, North Carolina. The first car to cross the finish line after 250 laps was driven by Bobby Allison.

The dispute in question came because of early 1970's combination races for the smaller Grand American Series, featuring "pony" cars, such as the Chevrolet Camaro, Ford Mustang, and AMC Javelin, and the Grand National Series, featuring the Chevrolet Chevelle, Ford Torino Talladega, Dodge Charger Daytona, and Plymouth Roadrunner / Superbird. For that race, and the race following at West Virginia International Speedway, Allison raced a Grand National - Grand American combination race in a Grand American Series specification 1970 Ford Mustang, #49, sponsored by Rollins Leasing, and owned by Melvin Joseph. (Joseph was the head of Dover International Speedway until his death in 2005.) As he was not racing in a Grand National car, he never received credit in that series, but was credited with a Grand American Series ("pony" cars) win.

It should be noted NASCAR has had co-sanctioned races with various series in the past; in such cases, the win counts only in the series which that driver's car was sanctioned. Ironically, the driver tied with Allison in all-time Cup wins because of the dispute, is involved in this incident. An Automobile Racing Club of American / Winston West combination race in College Station, Texas on March 21, 1993, was won by Darrell Waltrip, driving an ARCA entry. That win was credited as an ARCA win only, and not counted in the NASCAR AutoZone West Series, Grand National Division (as it is currently known) win list. Likewise, when a Winston Cup driver won a Winston Cup / Winston West combination race, the win counts in Cup, not West. The Busch Series and Busch North Series also raced combination races in the past.

The 1973 National 500 was held October 7 at Charlotte Motor Speedway in Concord, North Carolina. The first three cars to cross the finish line after the scheduled 334 laps (501 miles) were driven by Cale Yarborough, Richard Petty, and Bobby Allison, in that order. Again, these facts are not disputed. What is disputed, is the legality of the first two cars' engines, recounted in Jim Mclaurin’s book ”NASCAR'S Most Wanted", in the chapter “Fudgin’ With the Rules”:

In the 1973 National 500 at Charlotte Motor Speedway, Allison protested that the engines in winner Cale Yarborough's and second-place Richard Petty's cars were over-sized. NASCAR inspected all three of the top finishers, and Allison's engine fit the cubic-displacement specs. Six hours after the inspections began, NASCAR technical director Bill Gazaway told the press that the results were being sent to headquarters in Daytona for a final decision.

Monday afternoon NASCAR released a statement saying that, because the inspection facilities at Charlotte were inadequate, the pre-race inspection numbers would be used-when all three cars were legal and that the results would stand.

Allison threatened both to quit and to sue. It was not until after a private meeting with NASCAR President Bill France, Jr., a week later that Allison was assuaged. Speculation was that Allison had been bought off. Allison wouldn't confirm or deny it, saying only that he had “received satisfactory restitution”.

The results were never changed, but many to this day still believe that Allison was robbed of yet another win to add to his already long list.

Bobby was a car owner for numerous drivers from 1990 to 1996, most notably Hut Stricklin, Derrike Cope, Neil Bonnett , and Jimmy Spencer.