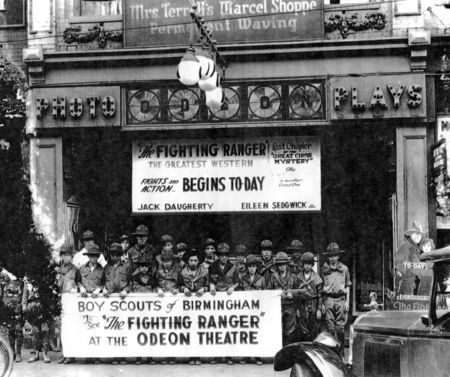 1925 photo of Boy Scouts outside the Odeon Theatre

The Odeon Theatre was a nickelodeon cinema located at 1907 2nd Avenue North. It opened in 1913 and was operated by A. Alexander Wall.

In 1916 it was known as Odeon One to distinguish it from the Odeon Two on 20th Street. It was associated with the Mutual picture service and generally kept a Charlie Chaplin film on the bill.

That year, under the management of Marvin Wise, the cinema was known for showing the latest Charlie Chaplin films distributed by the Mutual Film Corporation. Admission was five cents. Wise died in 1925.