Oneonta (formerly Vandaliah) is a city of 6,627 on 15.6 square miles in Murphree's Valley in eastern Blount County. It was incorporated on February 18, 1891. Ross Norris is the current mayor and Ed Lowe is the city manager. The city's Municipal Complex is located at 202 3rd Avenue East in the city's downtown area.

The area of present-day Oneonta was first settled by A. J. Ingram, R. A. Bynum, George Bynum and Howell Patterson. The present town was established with the coming of the Louisville & Nashville Railroad's Birmingham Mineral Railroad in 1888. It was given its name that year by railroad superintendent William Newbold for his former home in Otsego County, New York. The word is said to mean "place of open rocks" in the Iroquois language.

In 1897 the Blount County Courthouse was moved from Blountsville to Oneonta's Farmers Alliance Building, establishing the present seat of government. Oneonta was incorporated in 1891 with A. J. Ingram elected as its first mayor. The Blount County News-Dispatch was established in 1889, the Blount Countian was founded as the Southern Democrat in 1894.

Oneonta's largest employer was once VF Jeanswear, which manufactured Wrangler and Lee blue jeans. Other large employers include the Blount Medical Center and a Super Wal-Mart. 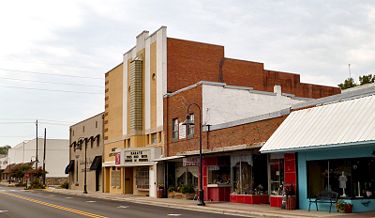 Oneonta's residents are served by Oneonta City Schools, the Oneonta Utilities Board and Otelco telephone, cable and internet service. The five-member Oneonta City Council meets on the 2nd and 4th Tuesday's of each month. The Oneonta Police Department employs 20 full-time sworn officers while the Oneonta Fire Department keeps five firefighters on each shift.

The Oneonta Park & Recreation Board maintains Woodland Park, the Oneonta City Pool, and Oneonta Recreational Park, where the relocated L & N Railroad Depot serves as a banquet hall. Blount County's Palisades Park is just north of the city. Both the Heritage and Limestone Springs golf courses are located in Oneonta.

The Oneonta Public Library houses over 44,000 volumes. The city also operates the Robbins Field airport with a 4,210-foot paved runway.

As of the Census Bureau's American Community Survey of 2009, there were 6,785 people residing in the city's 2,293 housing units, for an average household of 2.87 persons. The racial makeup of the town was 86% White and 5% African American. 19% of the population was Hispanic or Latino of any race.

In the 2000 census, there were 2,177 households out of which 28% had children under the age of 18 living with them, 51% were married couples living together, 11% had a female householder with no husband present, and 35% were non-families. 32% of all households were made up of individuals and 18% had someone living alone who was 65 years of age or older. The average household size was 2.35 and the average family size was 2.97.