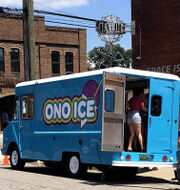 In 2012, owner Rebecca Davis began with a hand-crank ice shaver and a cooler set up on a folding table outside of restaurants and breweries and at festivals, after a trip to Hawaii’s famous Matsumoto Shave Ice. She settled on the name "Ono", which means "delicious" in Hawaiian.

In 2015 Davis created a Kickstarter campaign to purchase a food truck. She was able to acquire a former Birmingham Police Department tactical panel van and had it converted into a food truck, which made its debut at Saturn in Avondale on July 22, 2018.