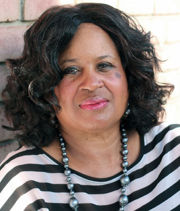 Pat Davis (born c. 1940s) is a retired teacher, a former state legislator, and the current president of the Smithfield Neighborhood Association.

Davis' family lived in North Birmingham when she was born, but she was raised in Youngstown, Ohio. She returned to Birmingham to marry, settling in Highland Estates to raise her three sons. She earned a bachelor's degree at Daniel Payne College and went on to complete a master's in administration and supervision at Alabama State University.

Davis became involved in neighborhood politics and was elected to the Alabama House of Representatives in 1982. She served until 1989 when she was convicted of extorting money from a United Mine Workers of America official in exchange for her vote. An appeals court overturned the original verdict, but she was convicted on re-trial in 1995 and served four years in prison before earning a pardon in 2006.

Davis returned to politics for a bid to represent Birmingham City Council District 1 in the 2013 Birmingham municipal election, challenging incumbent LaShunda Scales. As a candidate, she favored business development and new recreational opportunities in the Parkway East corridor and more effective use of public land banking and social services to reduce blighted properties.