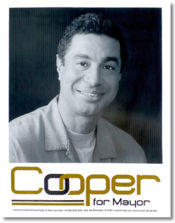 Patrick C. Cooper (born 1958 in Mobile) is an attorney and two-time candidate for Mayor of Birmingham.

Cooper is the son of Marine General and former Alabama Representative and Ambassador Gary Cooper. He graduated from Yale College and the Yale Law School, where he lettered in basketball and also ran on the track team. He flunked out during his sophomore year and took a job in Washington D.C. as a construction worker for 18 months before gaining readmittance.

After graduating he worked as a clerk for Sam Pointer Jr, Chief Judge of the United States District Court for the Northern District of Alabama. He then became a partner at the firm of Maynard Cooper & Gale before taking a leave of absence to run for Mayor of Birmingham. He left Maynard Cooper and joined the firm of Ward and Wilson subsequently. Cooper has also served as an Alabama Bar Examiner, as a member of the ABA Commission on Opportunities for Minorities in the Profession, and as a director of the Commonwealth National Bank.

In 2006 Cooper founded Birmingham Vision, a non-profit which hires schoolchildren to clean up neighborhoods during the summer and distributes fans to elderly residents without air conditioning. He also coaches the Alabama Roadrunners girls' basketball team.

Cooper was the first candidate to declare for the 2007 Birmingham mayoral election. The primary topics Cooper talked about in his campaign were vision and leadership, crime, mass transit, and neighborhood improvement. He raised the most campaign funding of any candidate, primarily through individual contributions, and was the first to air television commercials in the race. He ended up with 15,392 of 52,111 votes cast (29.54%) and narrowly missed a runoff with Larry Langford who surpassed the 50%+1 vote threshold for an outright victory by 170 votes. Amid numerous reports of voting irregularities concentrated in predominantly-white neighborhoods Cooper asked for a recount and then filed a lawsuit claiming that Langford was not a resident of Birmingham at the time of the election. He later withdrew the challenges.

After Langford was convicted on federal bribery and corruption charges in November 2009, Cooper filed for the special election to fill the remainder of his term. He raised by far the most campaign contributions and aired numerous television advertisements. In the December 8 primary, with only 26% of voters participating, he led a field of 14 with 40% of the vote. However, in the January 19 runoff, with 41% of eligible voters at the polls, William Bell defeated him by 54% to 46%.

Cooper is divorced and has three children, Sophie, Celia and Sam.