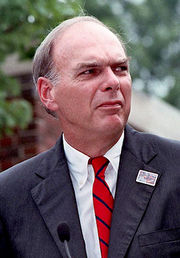 Paul William Bryant Jr (born December 19, 1944 in Birmingham) is a Tuscaloosa businessman and chairman of the Crimson Tide Foundation. He was appointed to the University of Alabama Board of Trustees in 2000.

Bryant was the son of legendary college football coach Bear Bryant and his wife, Mary. He was born in Birmingham while his father was serving in the U.S. Navy during World War II, but grew up in Lexington, Kentucky and College Station, Texas. He played youth football as a boy, but contracted hepatitis, which required nearly a year of recuperation and left him physically weakened. He spent time with his father when he was coaching the Alabama Crimson Tide football team, hoping to follow in his footsteps. He was on the roster of Tom Tarleton's basketball team at Tuscaloosa High School, but was limited in playing time due to his weakened constitution. During the summer he was assigned a car and worked full time as a recruiter for the Crimson Tide.

Bryant's hepatitis prevented him from participating in officer training programs and earned him a deferral from the draft. He enrolled at the University of Alabama and earned a finance degree in 1966. He pledged Sigma Nu and served as his fraternity's rush chairman as a senior. He married his girlfriend, Cherry Hicks shortly after graduation.

At his father's urging, Bryant was planning to attend law school. Charlie Finley hired him for the summer as an assistant to the general manager of the Mobile A's and, after Bryant exposed accounting irregularities in the organization, offered him the full time position. He was promoted to be general manager of the Oakland A's when Finley moved the Major League squad to California, but Bryant and his wife were uncomfortable outside of the South and he stepped down, returning to Birmingham as a stock broker for a year before moving back to Tuscaloosa to focus on vetting the endless stream of business offers pitched to his father.

Bryant made his own investments in some of the better opportunities that came his way, including the Bear Bryant VW auto dealership. With the advantage of his name, his father's contacts, and the fact that many of his peers were away serving in Viet Nam, Bryant's business career enjoyed a head start.

He partnered with A. Wayne May and Sam Phelps to build Greene County's GreeneTrack greyhound racing operation in 1977. He explained the business model to a columnist for Esquire in 1989: "Greenetrack's so successful because everyone in Greene County brings their last two dollars and thinks they're gonna win a million." He further explained that, "down here, it's generally your lower-class of blacks, your welfare blacks. You want 'em to have enough room to get in and out, but at the same time you want to get as many in as possible."

When Milton McGregor opened VictoryLand in Macon County in 1983, Bryant and some of the Greene Group, Inc. partners formed Pari-Mutual Management, Inc. to operate it. Minority partners who were left out of the deal objected, and the Alabama Supreme Court directed that the profits from the new company should benefit Greene Group stockholders. Bryant and his partners went on to develop other greyhound tracks in Idaho; Council Bluffs, Iowa and Galveston, Texas. The IRS and Iowa officials suspected Bryant of using the non-profit created to operate the Council Bluffs track as a tax shelter for other profitable ventures.

Bryant split the track's ownership between the employees and the Greene County Commission in 1995.

That same year, Bryant purchased the Reynolds Ready Mix concrete manufacturing company and renamed it Ready Mix USA. In 1999 he acquired Harvest Select Catfish. Those acquisitions were backed by the assets of Bryant's Alabama Reassurance Company, which was described by a Mississippi regulator as "propping up broke companies for a fee," as a way to "offset dog track profits."

In 1997 Alabama Reassurance was implicated in a fraud scheme carried out by Pennsylvania attorney Allen W. Stewart. Stewart was sentenced to prison, but Bryant's company was never indicted. The insurer reorganized as Alabama Life Reinsurance Company in 2006. In 2010 and 2011 Ready Mix USA's joint ventures with Mexico-based CEMEX netted Greene Group $450 million in profits from the sale of its interests.

Bryant returned to banking in 2005 when he founded Bryant Bank, which has been recognized for its role in financing rebuilding in Tuscaloosa following the April 2011 tornado outbreak.

Bryant was nominated by Governor Don Siegelman for a seat on the University of Alabama Board of Trustees in 2000. Some in the Alabama House of Representatives opposed the nomination, citing under-representation of trustees with ties to UAB and controversial comments attributed to Bryant in a 1989 article in Esquire. With the nomination still up in the air, Frank Bromberg resigned his seat, allowing the board to appoint Bryant without legislative approval. Among his first actions as a trustee was to join with athletic director Mal Moore in launching a Crimson Tradition Fund to raise capital for improvements to athletic facilities. Bryant jump-started the campaign with a personal $10 million contribution. It eventually raised $70 million, which was used to finance a bond-issue which increased the athletic department's long-term debt from $36 million to $197 million between 2002 and 2012.

Bryant was appointed to a second six-year term in 2006, elected president pro tempore in 2011, and re-appointed for a third term in 2012.

Bryant has also served as a director of the Alabama Heritage Foundation, a trustee of the Museum of the Confederacy in Richmond, Virginia, and chairman of the Washington D.C.-based Civil War Preservation Trust. He is a co-author, with Delbert Reed of When Winning Was Everything: Alabama Football Players in World War II and, with several others, of The Complete History of Crimson Tide Football, both published in 2013.