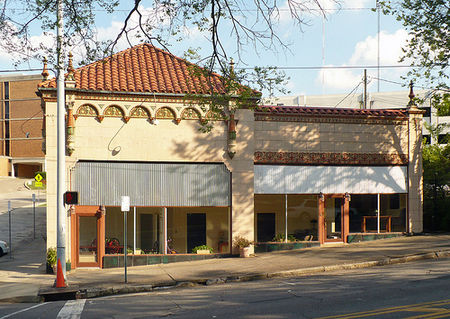 The Pita Stop building, also called the Venetian Village building, is a small retail strip located on the southwest corner of 11th Avenue South and 12th Street in Southside. It was constructed in 1927 with elaborate polychrome terra-cotta ornamentation representing a fine example of the Renaissance Revival style. Its current familiar name refers to the Pita Stop Cafe, a Mediterranean restaurant which occupies most of the building.

In the late 1980s, another restaurant, the Bangkok House, was also in the building.

The building was owned by HealthSouth and used to store old computer equipment. In 2000 then-Fairfield mayor Larry Langford asked CEO Richard Scrushy to make some of the vacant space available to John Katopodis for his Council of Cooperating Governments. He later proposed that the unused computers be refurbished and given to schools. Katopodis helped create the Computer Help For Kids non-profit which shared office space with the Council. Another charity, the Holy Family Foundation, headed by Melva Langford, also uses the building for its business address.

After Scrushy's dismissal from HealthSouth under the cloud of a massive accounting scandal the company sold off its Southside holdings to UAB for $33 million, which included an option to buy the Pita Stop building. Katopodis sued HealthSouth saying that he had been promised the building as partial payment for consulting work. The company filed a countersuit alleging mismanagement of contributions and the two parties reached an undisclosed agreement in March 2008, shortly after testimony began.

With the dispute over the title to the building concluded, UAB's offer of $450,000 was accepted. The university plans to lease it back to the Pita Stop restaurant. Though barred from discussing specifics regarding the settlement, Katopodis indicated that the charities currently sharing office space in the building will continue to have access to the space for the immediate future.