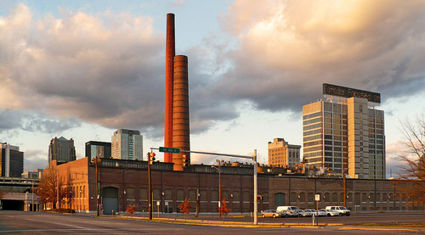 2008 view from the southwest 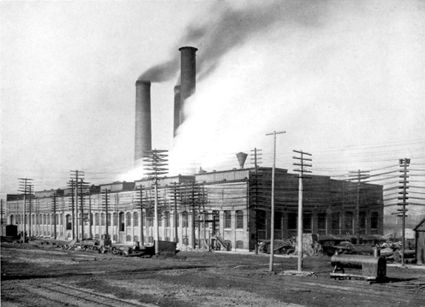 1908 view from the north before the Railroad Reservation was regraded

The Powell Avenue Steam Plant is a former coal-burning steam plant located at 1830 Powell Avenue at 18th Street adjacent to the Railroad Reservation in downtown Birmingham. It was constructed in 1895 by the Consolidated Electric Light & Power Company which was folded into the Birmingham Railway, Light & Power Company in 1898. The plant provided steam and electrical power to businesses and downtown streetcars.

The layout of the plant was described in the May 1900 issue of Street Railway Journal:

The power station is a large and handsome brick building located near the Union Depot, corner of Powell Street [sic] and Nineteenth Street, not far from the center of the city alongside the tracks of the Louisville & Nashville, Alabama Great Southern and the Central of Georgia railroads. It was erected in 1895, and, though extensive and modern in its equipment, it has been found necessary to greatly increase its capacity, and the extensions are to be made forthwith.

The general dimensions of the power house are 150 ft. x 150 ft., which it is proposed to increase to 200 ft. x 150 ft. so as to accommodate the additional machinery that is to be installed. The roof is supported on steel girders and covered with gravel. It is proposed to have all the direct-connected apparatus installed in the engine room, while the machines with belt connection will be placed in an adjoining room. All wires will leave the switchboard under the floor and connect with existing pole lines on the outside.

At the present time there are fifteen tubular boilers 16 ft. x 6 ft. made locally, and nine more, the same size, are to be installed. These boilers are fed by one furnace each with the ordinary brick setting. Two 2500-hp Wainwright heaters are in use, and three more heaters are to be installed. The separator is of a type manufactured by the East Birmingham Foundry & Machine Works

All steam pipes, the double-header system being in vogue here, are installed beneath the floor, and steam is conveyed to the engines at 100-lbs. pressure. This system is so satisfactory that it will be continued when the station is rebuilt or remodeled. Throughout the station Chapman valves are in general use, from 6 ins. upward, while for smaller sizes the Jenkins valve is used exclusively. There are three Worthington 40in. duplex pumps at work in the station and several more are to be installed.

The engine room at present has two electric cranes, while a third one, capable of lifting and carrying weight up to 30 tons, is about to be installed, though it has not yet been ordered. The switchboard is an unusually ample one, having twenty-five panels of enameled slate, 70 ft. long x 8 ft. high, and equipped with every modern measuring instrument. The ground is made by connecting many cables with tons of old car wheels buried in a pit 10 ft. deep.

The electric apparatus includes four generators of 80 kw, two of 300 kw, and one of 85 kw, all of the G. E. type, which number will shortly be increased.

As planned the additional engines and generators will all be direct connected, and return tubular boilers will be installed.

The plant became the property of the Birmingham Electric Company in a 1921 reorganization. In the 1930s the adjacent railroad grade was raised more than 20 feet along the north facade of the plant. The facility was acquired by Alabama Power in 1952 as part of a merger.

The steam plant, which had more than 400 customers in the 1950s, continued to serve about 20 customers well into the first decade of the 21st century. These included UAB, the Veterans Administration Medical Center, the Eye Foundation Hospital, Colonial Bank and the Alabama Theatre.

Though they are generally well-maintained, steam pipes running below city streets often leak enough to create visible steam exhaust through street grates in the downtown area. On one occasion in July 2003 an expansion joint failure led to a cloud of steam enveloping a car on the 700 block of 19th Street North and burning its occupants, a brother and sister from Columbus, Georgia. The joint was repaired.

In addition to the Powell Avenue Plant, Alabama Power operates a gas-powered steam boiler near UAB's Bartow Arena. In 2008 Alabama Power notified its steam customers and the Alabama Public Service Commission that it intended to cease providing steam service in Birmingham because it was no longer financially feasible.

In 2012 Alabama Power purchased the Birmingham Parking Authority Lot D on Block 113C just north of the plant as part of a potential redevelopment of the combined site. In July 2014 the company's president, Mark Crosswhite, announced that the utility intended to develop a mixed-use cultural and entertainment complex at that location. HOAR Construction was hired to perform pre-construction clean-up and stabilization of the plant. Subcontractor Hamon Custodis performed specialized conservation work on the landmark smokestacks.

The site was added to the National Register of Historic Places in January 2015. In September of that year, the utility won approval from the Birmingham Design Review Committee for its preliminary plans for a public urban plaza on the former parking lot. The plaza design was created by Nelson Byrd Woltz of Charlottesville, Virginia along with associated firms Birchfield, Penuel & Associates, Macknally Land Design and LBYD Engineers

After completing hazardous materials abatement and structural stabilization of the former steam plant, Alabama Power turned the development of the "Powell Steam Plant" project over to Orchestra Partners. In February 2022 the developers announced that Alamo Drafthouse, an Austin, Texas-based cinema chain, would be the anchor tenant for the Steam Plant, leasing 50,000 of the 86,000 available square feet in the building.