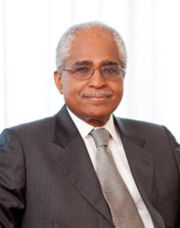 Ralph D. Cook (born c. 1944 in Birmingham) is an attorney at Hare, Wynn, Newell & Newton, former Alabama Supreme Court associate justice, former dean of the Miles Law School, and current chairman of the board of directors for the Birmingham Museum of Art.

Cook was the second of three children born to dry cleaner Joe and his wife, Nannie, a teacher and Jefferson County Schools principal. He graduated from Wenonah High School in 1961, earned a bachelor of science at Tennessee State University in Nashville in 1964 and a Juris Doctorate at the Howard University School of Law in 1967. He was admitted to the Alabama State Bar in 1968.

Cook became an assistant district attorney in the Bessemer Division in 1974. He taught at San Jose State University and Cabrillo College in California before joining the faculty of Miles Law School in 1975. He was named dean of the school of law a year later, and retired from that post in 1999.

Cook was elected a district court judge in 1976 and appointed to the Jefferson County Circuit Court in 1981, winning re-election in 1982 and 1988. He was appointed by Governor Fob James to succeed Oscar Adams Jr on the state Supreme Court in 1993. He lost in the 2000 general election and left office in January 2001, joining Hare, Wynn a month later. He left the firm in 2013 when William Bell appointed him as city attorney.

Cook has served as president of the Alabama Lawyers Association and the Alabama Association of Justice. He won the Alabama State Bar's Judicial Award of Merit in 1996. He has also served as president and director of the West Jefferson Kiwanis Club and as lieutenant governor of the Kiwanis Alabama District. He has served on the boards of the Community Foundation of Greater Birmingham, the Alabama Civil Justice Foundation, the Bessemer Chamber of Commerce, the Bessemer YMCA, the St Vincent's Foundation, Alabama Power Company, the Birmingham Civil Rights Institute and the Birmingham Business Alliance and the Bethel African Methodist Episcopal Zion Church. He was named chairman of the board of the Museum of Art in 2011, succeeding Thomas Hamby. He was inducted into the Alabama Academy of Honor in 2012.

Cook and his wife, the former Charlsie Davis, have three children: Kimberly, Nakela and Ralph, Jr, a consultant with Handprint Bell at Atlanta, Georgia.