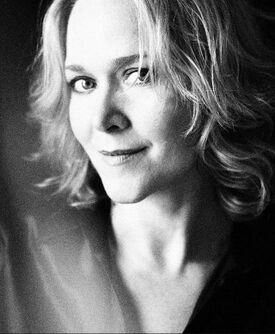 Rebecca was the daughter of Norse Doak and Martha Baggett Luker of Helena. She sang in the choir at 1st Baptist Church Alabaster and played in the marching band at Thompson High School. She was runner up to Alabama's Junior Miss in 1979, performing "Much More' from "The Fantasticks" for the talent segment. She began performing in operas and musicals in college and earned a bachelor of arts in music at the University of Montevallo in 1984 after taking a year off from school to perform professionally with the Michigan Opera Company. She also performed with Birmingham's Town and Gown Theatre, where Rebecca Paines encouraged her to pursue Broadway.

Among many recordings, Luker was well known for her Rebecca Luker Sings Cole Porter, and is featured on Paul Schwartz's trilogy of Aria albums. On television she appeared in episodes of "Law and Order: SVU", "Boardwalk Empire" and "N.C.I.S. New Orleans", and had a major role in the Hallmark Hall of Fame movie Cupid and Cate.

In 2000 Luker was inducted into the Alabama Stage and Screen Hall of Fame at a ceremony at Shelton State Community College in Tuscaloosa.

Luker was married to actor Gregory Jbara from 1993 to 1996. She married actor Danny Burstein in 2000 and had two stepsons, Alex and Zach. In February 2020 Luker announced that she had been diagnosed with Amyotrophic Lateral Sclerosis‎ (ALS). She died from complications in December of that year.