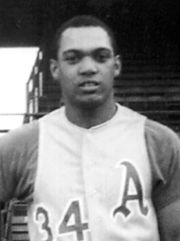 Reginald Martinez "Reggie" Jackson (born May 18, 1946 in Cheltenham Township, Pennsylvania) is a Hall of Fame right fielder who played for the 1967 Birmingham A's before starting a 21-year Major League career with four teams and earning the nickname "Mr October" for his late-season clutch hitting, including three consecutive home runs in the 1977 World Series. He was named to 14 All-Star teams and was the American League's Most Valuable Player in 1973. He was also a two-time World Series MVP and has had his uniform numbers retired by the Oakland Athletics (9) and the New York Yankees (44).

Jackson was born in the predominantly-Jewish Wyncote neighborhood of Cheltenham Township, just north of Philadelphia, Pennsylvania. His father, Martinez Jackson, was a half-Puerto Rican tailor who had played in the Negro Leagues as a second baseman for the Newark Eagles. His mother, Clara, was full Puerto Rican. When they divorced in 1950, Jackson and one of his half-brothers stayed with his father while the other children remained with his mother.

He attended Cheltenham High School and was a standout athlete on the school's football, basketball, baseball and track and field teams. He injured his knee playing football in his junior season, but was able to return for the final game. In that game he fractured five vertebrae and spent six weeks in the hospital and another month in a neck cast. He was a star batter and pitcher on the baseball team, batting .550 and pitching several no-hitters. During his senior year, his father was arrested for selling bootleg liquor and served six months in prison. He graduated in 1964.

Jackson was recruited as a football player by the University of Alabama, Georgia and Oklahoma, all of which then excluded African-American athletes but were willing to take a chance on him. Jackson was leery of moving to the deep south, and was put off by Oklahoma's request that he not date white women while in college.

Meanwhile San Francisco Giants scout Hans Lobert was very interested in Jackson, who also had interest from the Los Angeles Dodgers, Minnesota Twins and Philadelphia Phillies. His father urged him to get a college education, so he accepted a football scholarship from Frank Kush's Arizona State University Sun Devils, which would also allow him to play baseball.

After his freshman year, Kush wanted to move him from halfback to defensive back. Jackson, who had spent the summer breaking records in an amateur baseball league, decided to leave the football team and became a scholarship baseball player. He took Rick Monday's spot in center field and broke a team record for home runs in his sophomore season, earning All-American honors. Now clearly a top Major League prospect, Jackson made the decision to turn professional.

Jackson was selected by the Kansas City Athletics as the second overall pick in the 1966 Major League draft. He signed with the A's for $85,000 and reported to training camp that June with the Single-A Lewis-Clark Broncs in Lewiston, Idaho. He spent his first season there, and with another Single-A team, the Modesto Reds, in California.

In 1967 Jackson reported to Charlie Finley's newly-created Double-A Birmingham A's, managed by John McNamara. It was the first racially-integrated professional baseball team to play for Birmingham and McNamara helped Jackson shrug off the lingering racism surrounding the club. He and fellow star Rollie Fingers helped the A's claim a Southern League title by three and a half games.

After 114 games with the A's, Jackson was called up to debut with Kansas City in a double-header on June 9, 1967. He recorded his first Major League hit, a triple off of Cleveland reliever Orlando Pena, in the second game.

In 1968 Finley moved the Athletics to Oakland. During the 1967 season Jackson briefly outpaced Roger Maris' 1961 home run count, but finished the season with 47 to Maris' record of 61. Jackson approached Finley to ask for a pay raise in the off-season, but was turned down. In the 1970 season Jackson's batting dropped off significantly, ending up at a .237 average with 23 home runs. After a brief demotion, Jackson returned as an All-Star in 1971. In the All-Star game he sent a Dock Ellis pitch soaring over Tiger Stadium's right field stands an into an electrical transformer on a light standard.

In 1971 the Athletics won the American League's Western Division title, their first since 1931, when the team was still in Philadelphia. They lost the AL Championship Series to the Baltimore Orioles. When the A's returned to the ALCS in 1972; their series with the Tigers went to five games, and Jackson scored the tying run in the clincher by stealing home. In the process, however, he tore his hamstring and was unable to play in the World Series. The A's managed to defeat the Cincinnati Reds in seven games without him.

Jackson reported to A's spring training in 1972 sporting a mustache. Inspired, Finley offered the other players $300 bonuses to grow mustaches and scheduled a "Mustache Day" with Frenchy Bordagaray as a special guest. The 1973 Athletics returned to the World Series and Jackson was named the American League's Most Valuable Player that year. Oakland beat the Mets in a seven-game World Series. In the final game Jackson and fellow Birmingham alumnus Bert Campaneris both hit two-run homers off Jon Matlack. Jackson was named the series' Most Valuable Player. The team repeated as World Champions in 1974, dispatching the Los Angeles Dodgers in five games.

In 1975 the A's won their division, but were swept by the Red Sox in the American League Championship Series. Finley, knowing he wouldn't be able to match Jackson's salary demands in free agency, traded him on April 2, 1976 to the Baltimore Orioles. Jackson helped them to to second-place finish.

During his nine seasons with the A's Jackson earned major accolades, but also gained a reputation as a showoff at the plate and as an underachiever on the bases. His former teammate Darold Knowles was asked in 1977 if Jackson was a hot dog and replied "There isn't enough mustard in the world to cover Reggie Jackson."1.

As a free agent for 1977, Jackson was able to command a five-year, $2.96 million contract from the New York Yankees. He saw himself as the "straw the stirs the drink" that could help the Yankees break their 15-year championship drought. When he made that statement he also seemed to belittle catcher Thurmon Munson, further straining Jackson's relationship with manager Billy Martin and his teammates. The tension came to blows in a June loss to the Red Sox. Martin yanked Jackson out of the game after he allowed a Jim Rice fly ball to drop in front of him. Their subsequent argument in the dugout was televised nationally. Owner George Steinbrenner gave Martin an ultimatum to either leave Jackson in the cleanup spot for the season or lose his job. The Yankees finished strong with Jackson's bat leading the way, won their division by two and a half games, and claimed the pennant in a five-game series against the Kansas City Royals.

During an interview in the midst of the 1977 World Series against the Dodgers, Munson suggested that the reporter should speak to Jackson, saying "go ask Mr October". With Jackson hitting crucial home runs in games four and five, followed by three consecutive homers on three different pitchers' first pitches in game six, the nickname stuck. Jackson became the first player to win the World Series MVP award for two teams. His 25 total bases in the series broke Babe Ruth's record and still stands.

Despite his heroics at the plate, manager Billy Martin never warmed to Jackson. He suspended the right fielder for disobeying a sign in July 1978. Martin resigned the next day under pressure and was replaced by former White Sox manager Bob Lemon. At one point 14 games behind the Red Sox, the Yankees charged back to tie for first at the end of the season and won a one-game playoff at Fenway Park 5-4 with Jackson knocking in the winning run in the eighth. He helped the Yanks defeat the Royals in four straight to claim a third consecutive League Championship and a rematch against the Dodgers in the World Series.

Los Angeles won the first two games at Dodger Stadium, taking the second when rookie reliever Bob Welch struck Jackson out with two on and two outs in the ninth. The Yankees won the next three in New York, returning the series to the West Coast. Jackson hammered a two-run home run off of Welch in the 7th inning of a 7-2 victory for the championship.

In 1980 Jackson averaged .300 for the first time in his career and tied the Brewers' Ben Ogilvie for the lead in home runs with 41. The Yankees were swept, however, by the Royals in the ALCS. 1981 was the final year on Jackson's contract, which Steinbrenner elected not to extend. The slight provoked a public dispute between the owner and his star right fielder that continued through the 1981 players' strike. When the season resumed Jackson's bat helped the Yankees win another pennant, but he missed two games of the World Series with a sore foot. Though doctors had cleared him to return, Lemon left Jackson on the bench for game three, which was a loss. The Dodgers went on to win the series in seven games.

California Angels owner Gene Autry signed Jackson as a free agent at the end of the season and gave him a five-year contract. He started the 1982 season in a hitting slump, but was energized by his April 27 return to Yankee Stadium by knocking a home run off a Ron Guidry pitch. New York fans blamed Steinbrenner for losing Jackson and cheered the former Yankee in the game. The Angels won the American League's West Division that year and again in 1986, but lost both Championship Series. Jackson hit his 500th home run at Anaheim Stadium on September 17, 1984, which happened to be the 17th anniversary of his first.

In 1987 Jackson returned to the Oakland Athletics on a one-year contract, and then retired at the end of the season.

Over the course of his 21 season in the Majors, Jackson's teams won six pennants and five World Series. He was a 14-time All-Star and hit 563 career home runs (6th all-time in 1987) with a .490 slugging percentage. He was also the sport's all-time leader in strikeouts with 2,597.

Jackson worked as a field reporter and color commentator for ABC Sports while still in the Major Leagues as well as after retiring from the game. He appeared as a guest on television series and in numerous films, including a major role in "The Naked Gun" ( ). He was reportedly considered for the role that went to LeVar Burton in "Star Trek: The Next Generation."

Jackson spent some time in the Athletics organization as a coach, but was fired in 1991. Eventually Jackson and George Steinbrenner buried the hatchet and Jackson took a job with the Yankees as Steinbrenner's "special assistant", helping develop players in the team's minor-league system. He was part of a group that made an unsuccessful bid to purchase the Angels in 2002.

Jackson was inducted to the Hall of Fame in 1993 and is depicted in a Yankees cap on his official plaque. Another plaque at Monument Park at Yankee Stadium celebrates Jackson as "One of the most colorful and exciting players of his era," and "a prolific hitter who thrived in pressure situations."