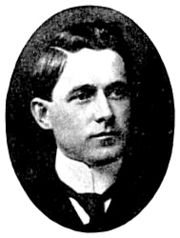 Richard Powell McNally or McAnnally or McAnally (born November 11, 1871 in Birmingham; died September 7, 1928) was the first boy born in the new city of Birmingham and, as such, claimed a lot on 1st Avenue North near 22nd Street as a prize from the Elyton Land Company.

McNally was the son of Patrick and Catherine McNally, both natives of Ireland who had emigrated as children. The married in Key West, Florida before coming to Birmingham earlier in 1871. Richard was born in a workshop on the corner of 1st Avenue and 23rd Street North while his father completed construction of a proper house. He was baptised at St Paul's Catholic Church under the sponsorship of Jane Ketchum and Miss Fogarty

In addition to the lot given him by the Elyton Land Company, McNally's father also bought a three more lots for him, a half block on 6th Avenue North between 30th and 31st Streets, hoping to secure his wealth. McNally later exchanged those lots for a half block at 7th Avenue North and 30th Street, where he made his residence.

Nicknamed "Birmy" by his friends, McNally was a local celebrity. He was educated in Birmingham and at St Mary's College in Belmont, North Carolina, after which he read law and was admitted to the bar in 1896. He practiced as an attorney and served as a judge and was elected in 1899 to a four-year term on the Birmingham Board of Aldermen. In 1909 his office was located in room 455 of the Hood building on the northwest corner of 20th Street and 3rd Avenue North.

McNally married Nellie Farinas of Pensacola, Florida in 1899. He died in 1928 and is buried at Oak Hill Cemetery under a headstone donated by the Birmingham Bar Association.