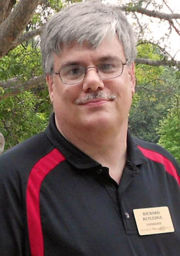 Rutledge was adopted by a Birmingham family when he was 6 months old and grew up in South East Lake, Roebuck and South Roebuck.

He was appointed vice-president of the Roebuck Springs-South Roebuck neighborhood in October 1996 and was elected president in 2002. He left to become Alabama chairman for the Louisiana-based Conservative Party USA in 2010. He also played guitar in the praise band at Cathedral of the Cross in Center Point from 2003 to 2008. He currently attends the Solid Rock Church in Pinson. He and his wife, Trena, have two grown sons.

Rutledge ran unsuccessfully for the Birmingham City Council District 2 seat in the 2005 Birmingham City Council election and as the Republican candidate for Alabama House District 58 in the 2006 general election. In 2009 neighborhood resident Everett Wess attempted to introduce motions at a neighborhood association meeting calling for Rutledge to be removed from office. Later that year he cited an ongoing personal disagreement with District 2 council representative Carol Duncan.

Rutledge ran again for City Council in the 2013 Birmingham municipal election, with a platform focused on improving Birmingham City Schools. He also promised to support community development loans for buyers of threatened properties and to foster commercial revitalization and the creation of an eastern area chamber of commerce. He was endorsed by the Conservative Party USA in that race.