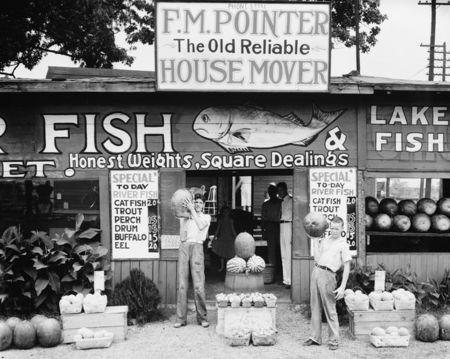 The River Fish Market is a fish market and casual restaurant located at 1928 Vanderbilt Road in Birmingham's Collegeville neighborhood. It is known for its fried catfish.

The business, founded by F. M. Pointer, opened in 1936. That same year Walker Evans took a photograph of it, captioned "Roadside stand near Birmingham, Alabama," for the United States' Farm Security Administration. The original structure was replaced with a new market building in 1940. Pointer sold the business to Ed Scott in 1953.

When Scott retired in 1973 he turned it over to his son, Kent Scott. He sold the business in 2005 and founded Snapper Grabbers in Vestavia Hills.

The current owner Wilson Crasta, who bought the market in 2019, plans to renovate with Evans' photograph as his model.