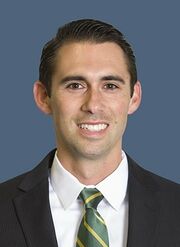 Robert Ehsan (born May 3, 1982 in San Jose, California) was the 6th head coach of the UAB Blazers men's basketball team. He served as interim head coach following the departure of Jerod Haase in March 2016 and was named as the permanent head coach on April 4. He led the team for four seasons before being fired in March 2020.

Ehsan is the son of Hassan Ehsan and Kathleen Harbaugh of San Jose, California. He played basketball at Bella Vista High School and led his team in scoring for all four years, included 21 points per game as a senior. He also played wide receiver on the football team, and led the Broncos with 24 receptions.

Ehsan went on to accept a basketball scholarship from the University of California at Davis. He enrolled in 2000 and was redshirted for his freshman year played a limited reserve role during his sophomore season, highlighted by a four three-pointer run against Cal State-Hayward. He got his first three starts at point guard for the Aggies in the 2002-2003 season and averaged 5.0 points per game. As a senior, Ehsan started 22 games and averaged 7.0 points and 2.3 rebounds per game. He also led the team in free throw percentage, at 86.8% and was presented with the Gordon S. Baranco Award for exceptional leadership, unselfishness, work ethic and commitment to the team. He graduated with a bachelor's degree in economics and became interested in coaching while assisting with several college basketball camps during the summer.

Ehsan joined Gary Williams staff at the University of Maryland as a graduate assistant in 2006. He was promoted to assistant recruiting coordinator in 2008 and also completed a master's in business administration through Maryland's University College program that year. In 2009 he was promoted to assistant coach and spent two more seasons with the Terrapins. After Williams retired to become an assistant director of athletics in 2011, Ehsan was tapped as interim coach. Some in the program hoped he would get the permanent job, but Maryland hired Texas A&M's Mark Turgeon, instead.

In 2012 Ehsan joined Seth Greenberg's staff at Virginia Tech, but Greenberg was fired after that season. UAB coach Jerod Haase invited him to come to Birmingham as an assistant on his first staff in 2013 and Ehsan immediately made an impact by recruiting Virginia Tech transfer Robert Brown and in-state stars William Lee from Dallas County and Lewis Sullivan from Hazel Green. In 2014 Haase promoted Ehsan to associate head coach.

After Haase accepted the head coaching job at Stanford University in March 2016, he offered Ehsan the same role with the new team, but also supported his candidacy for the UAB vacancy. Ehsan remained in Birmingham as interim head coach during a 10-day national search before he was announced as the new permanent coach on April 4. Immediately after being introduced during a press conference the next day, Ehsan's first official act as head coach was to tell Chris Cokley to remove his hat indoors.

Ehsan compiled a 76-57 (0.571) record over four seasons with one post-season appearance in the 2019 College Basketball Invitational. He was fired shortly after the 2019-2020 season was cut short by Conference USA's response to the 2020 Coronavirus pandemic. Former UAB player and assistant Andy Kennedy was announced as his successor a few days later.

Ehsan and his wife, the former Lindsey Rattray, have three children.