This article is about the basketball coach, for others with similar names, see Andrew Kennedy. 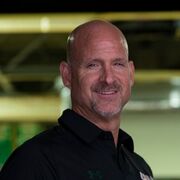 Kennedy is the son of Frank and Mary Kennedy of Louisville, Mississippi. He became interested in sports, and particularly basketball, as a boy. He spent most nights shooting baskets in his backyard, refusing to come inside without hitting 100 free throws in a row. He starred for Winston Academy as a freshman, and then transferred to Louisville High School as a 6'-7" power forward, where he was named Mississippi Player of the Year and a Parade All-American.

Kennedy accepted a scholarship offer to play for Jim Valvano's North Carolina State Wolfpack and helped the team win an ACC championship. When his grandfather fell ill in 1988, though, he transferred to UAB to be closer to his family. Over three seasons under Gene Bartow Kennedy earned All-Sun Belt honors and finished as UAB's second all-time leading scorer, after Steve Mitchell, with 1,787 points. He still holds UAB records for number of 30 points games, three-pointers made, and free-throw percentage.

Kennedy signed with the Charlotte Hornets, but was soon waived. He played professionally in Greece, the Netherlands, Spain and Puerto Rico before being forced to retire due to chronic knee problems. In 1994 he joined interim head coach Judas Prada's staff at the University of South Alabama. In 1996 he returned to UAB as an assistant to Murry Bartow.

Kennedy left Birmingham in 2001 to join Bob Huggins' staff at the University of Cincinnati. When Huggins resigned in 2005 Kennedy was named interim head coach. The Bearcats finished the season 21-13 with an NIT appearance. After the season he accepted an offer from the University of Mississippi to lead the Rebels men's basketball team.

Over 12 seasons at Ole Miss, Kennedys teams won 245 games, twice tied for first place in the Southeastern Conference's western division, and won invitations to two NCAA tournaments and six NIT tournaments. He was twice named SEC Coach of the Year. After announcing in mid-February that he had agreed to step down from Ole Miss, he opted to resign immediately. Assistant Tony Madlock succeeded him as interim head coach.

For the 2018–2019 season, Kennedy worked as an in-game color analyst, studio analyst and sideline reporter for ESPN and the SEC Network. He and his wife, Kimber, have 2 daughters, Meagan and Kaitlin.

On March 20, 2020 he was announced as the successor to Rob Ehsan as UAB's head coach.