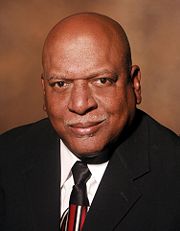 Rodger Mell Smitherman (born March 2, 1953 in Montgomery) has represented District 18 in the Alabama Senate since 1994.

Smitherman, a Democrat, is a lawyer, having recieved a bachelor's in business administration from University of Montevallo and his law degree from Miles Law School.

Smitherman served as President Pro Tempore of the Senate from 2009 to 2010.

Smitherman and his wife, Carole, herself a member of the Birmingham City Council, have four children: Rodger II, Tonya Renee, Mary Elaine, and Crystal Nicole.

Smitherman serves as an Elder at More Than Conquerors Faith Church. He is also the coach of the Ramsay High School junior varsity girls' basketball team and an assistant for the varsity team. He has also coached at W. J. Christian School and is a semi-pro golfer.