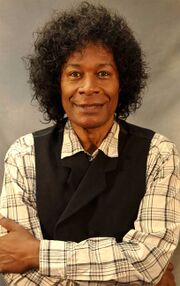 Ronald Scott McDowell (born c. 1953 in Pittsburg, California) is a self-taught sculptor and artist who teaches at Tuskegee University.

McDowell has produced public art projects including large scale murals, commemorative statues and coins, as well as private collector artwork such as heirloom portraits for a wide range of clients including famous celebrities, amassing over 2,000 works. As a young artist, he attracted the attention of Motown celebrities and eventually became Michael Jackson’s art teacher, and McDowell’s sketches were featured in a songbook included inside Jackson's Thriller blockbuster album.

McDowell was inducted into the Pittsburg Entertainment and Arts Hall of Fame in 2013.