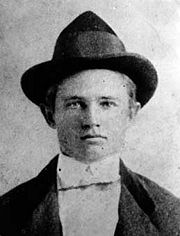 Reuben Houston "Rube" Burrow, often misspelled Burrows, (born December 11, 1854 in Jewell, Lamar County; died October 8, 1890 in Linden, Marengo County) was a nationally infamous train robber and outlaw in the Southern and Southwestern United States. During the final years of the American frontier, he became one of the most hunted in the Old West since Jesse James. From 1886 to 1890, he and his gang robbed express trains in Alabama, Arkansas, Louisiana, the Indian Territory and Texas while pursued by hundreds of lawmen and Pinkerton detectives throughout the southern half of the United States.

Burrow was the son of Allen Henry and Martha Caroline (Terry) Burrow who had settled in Lamar County in 1828. He and his older brother Jim read Jesse James stories at night and worked on his family's cotton farm near Sulligent by day. At the age of 18 Rube packed up and left to join his brother at their Uncle Joel's ranch in Stephenville, Texas. By all accounts, Burrow fully intended to become a rancher by saving up enough money to buy a spread of his own, marry and eventually start a family. He attempted farming but his wife died of yellow fever in 1880, leaving him to care for two small children. He remarried in 1884 and moved to Alexander, Texas, but when his crops failed, he turned to robbing trains.

His turn to crime occurred in December 1886 when he and Jim teamed with W. L. Brock, Leonard Brock, Henderson Brumley, and Nep Thornton to rob the Denver & Fort Worth Express while returning from a trip to the Indian Territory. Burrow and the other men waited at the train depot at Bellevue, Texas until the train arrived. Drawing their guns at the crew, in full view of the passengers, they entered the train but were only able to collect $300, as the passengers were able to hide most of their valuables by the time the outlaws passed through. In one of the cars, a U. S. Army sergeant and two privates were escorting two deserters in shackles. The passengers were able to persuade the officer not to fire at the outlaws, however he was later censured for cowardice by his superiors. Meanwhile, Burrow had already begun planning his next holdup.

From Texas to Arkansas 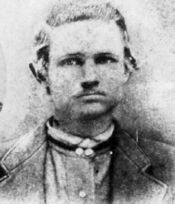 Six months after their first robbery, Burrow and his gang boarded the Texas & Pacific Express heading eastbound from Ben Brooks, Texas. Learning from their mistakes, Burrow held the engineer at gunpoint and forced him to stop the train on a trestle outside the town. This was to meant to discourage passengers who might attempt to interfere with the robbery. How much Burrow escaped with is not known, but it was apparently enough for him to rob a second train at the same spot on September 20, 1887. News reports estimated Burrow and his gang escaped with between $12,000 and $30,000.

On December 9, he and Jim Brock stopped the St Louis, Arkansas & Texas Railroad express train at Genoa, Arkansas. Despite being guarded by the Southern Express Company, the two men escaped with a Louisiana lottery payoff. Because the Southern Express Company was a client of the Pinkerton Detective Agency, the robbery came to the attention of Pinkerton detectives, lawmen and bounty hunters alike. Within five days, Pinkerton men came up with their first major lead. A deputy sheriff had reported that he had encountered three suspicious looking men on the day of the robbery. All three escaped, however one of the men left behind a raincoat which was eventually traced to a store in Dublin, Texas. The sales clerk identified the man who bought the coat as Jim Brock. Once in custody, Brock quickly confessed to participating in the robbery and named Burrow as the ringleader.

Burrow was unknown to authorities, having no prior criminal record, and Brock insisted he did not know the whereabouts of his accomplice. The Pinkertons would get their second break when Brock received a letter from the outlaw leader. Burrow was not yet aware of Brock's arrest and detectives seized the opportunity to capture him. According to the return address, the letter was sent from Lamar County, Alabama and a posse was immediately sent to his homestead. Upon their arrival on January 8, 1888, they surrounded his home but found that Burrow had fled after being warned by his brother Jim at their approach. 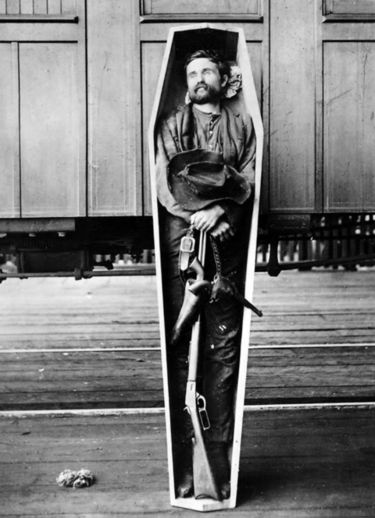 Two weeks after making their escape, Rube and Jim Burrow were spotted by a conductor while riding on a Louisville & Nashville train in southern Alabama. Police surrounded the train at a Montgomery stop and captured Jim after a brief gunfight. Rube was able to shoot his way out and escaped from the ambush alone. Jim was taken into custody and sent to jail in Texarkana where he would die from tuberculosis on October 5, 1888.

Although Burrow was usually a cautious and detailed planner, he began to develop a reckless attitude which was further encouraged by his recent series of near escapes. Shortly after the gunfight at Montgomery, Burrow shot and killed a Lamar County postmaster who refused to hand over a package addressed to W. W. Cain. The uncharacteristically cold-blooded murder of the postmaster turned the local residents against him and was forced to flee the county.

Burrow continued to rob trains despite being a wanted fugitive. In September of that year, he robbed the Mobile & Ohio express train near Buckatunna, Alabama and then the Northwestern Railroad train in Louisiana two months later. He was pursued by Pinkerton detectives following the robbery who chased him for two days across the Raccoon Mountains in Blount County. The posse was forced to turn back after two trackers had been killed and three others seriously wounded.

Becoming the sole subject of one of the most widespread manhunts in American history, Burrow would continue to elude authorities in the wilderness of Alabama hill country for another two years. On October 8, 1890, Burrow was recognized by a local storeowner, J.D. "Dixie" Carter, after riding into Linden, Alabama for supplies. He and two of his friends apprehended Burrow and marched him to the local jail where he remained until his escape less than two hours later. Another version claims he was captured by Carter single-handed and locked his storeroom while he went for help. Instead of taking the opportunity to leave town, Burrow stole a gun and went to confront the storeowner. Finding him at the local feed store, a gunfight broke out between the two men. The storeowner was hit in the arm while Burrow was shot in the stomach. Carter then went after Burrows as he staggered outside and gunned him down in the street.

Burrow's body was placed in a simple pine coffin and shipped back to his family in Lamar County by way of Birmingham. His body was displayed at the Union Station until about 11:00 AM on October 9 before he was put on another train stopping at Sulligent Station. Burrow was buried at Fellowship Cemetery in Lamar County. The former Rube Burrow's Food & Spirits which operated in Five Points South in the 1980s and 1990s was named for the famous outlaw.