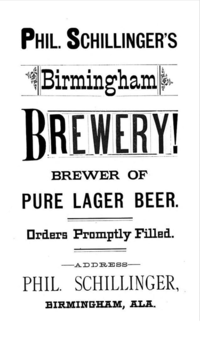 The Schillinger Brewing Company, originally known as Birmingham Brewery, was a large-scale brewing business founded by Philipp Schillinger with his sons, August, Louis, and Erwin in 1884. The family had previously operated the Phoenix Brewery in Louisville, Kentucky.

With funds raised by selling his stake in the Phoenix Brewery, Schillinger purchased the southern half of Block 163 on the north side of Avenue E between 21st and 22nd Street South. He and his sons August, Louis and Erwin moved to the city.

Schillinger's first commercial batch of "pure lager' beer, the first ever made in Alabama, hit the market on April 9, 1885. The brewery produced 8,000 barrels during its first year. During 1886 new equipment expanded the capacity of the plant to 10,000 barrels. The firm was incorporated as the "Schillinger Brewing Company" in May 1887.

By 1888 the 140x400-foot brewery plant occupied a half block and had a brewing capacity of 25,000 to 30,000 barrels. The firm also operated a bottling works and three large ice machines with a capacity of 70 tons. Kegs and bottles were kept in cold storage for delivery to wholesale distributors and local customers. Philipp Schillinger died that year, but his sons kept the business going.

In 1889 the Schillinger Brewing Company sold its lager alongside an "Extra Pale" beer, a "Hofbrau" variety, and a low-alcohol table beer. Erwin died in 1900. In 1901, during a boom in soft drink sales partially influenced by the temperance movement, the brewery registered a trade mark for "Beerine" alcohol-free beer. By 1903 the brewery covered three quarters of the block and had an annual production capacity of 25,000 to 30,000 barrels per year, while also manufacturing up to 100 tons of ice per day. The capacity of the plant's bottling works were doubled between 1901 and 1903.