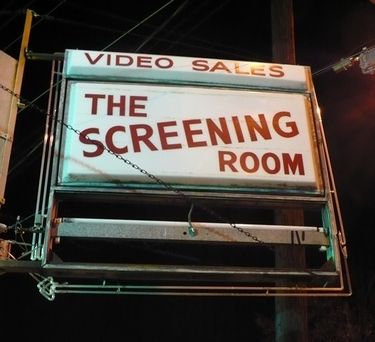 The Screening Room was an adult theater and video retailer located at 2130 2nd Avenue South, on the corner of 22nd Street South. The theater, which was in business from about 1982 to 2007, had a reputation as a pick-up spot for gay men and swingers. It was owned by a Las Vegas family.

After complaints from nearby residents and business owners about lewd behavior associated with the business, Birmingham Police increased enforcement activity at the Screening Room. The Birmingham City Council voted unanimously to revoke the theater's business license on November 27, 2007.

In September 2008 the Lemak Group purchased the 13,000 square-foot property that includes the former Screening Room for $300,000. They demolished the 3,000 square-foot corner building, leaving the adjacent upholstery shop and artist's studio intact and applied for a $1 million stimulus loan from the City of Birmingham to renovate them for restaurant, retail and office space. In 2010 the two buildings were sold to the Birmingham Chapter of the American Red Cross for their headquarters office.