From Bhamwiki
(Redirected from Silvertron Cafe)
Jump to: navigation, search

The Silvertron Café was a casual neighborhood restaurant located at 3813 Clairmont Avenue in Forest Park from 1986 to 2018. The name refers to a television repair shop that was previously located in the building. The building is managed by real estate developer Chris Boehm, a former partner in the restaurant.

Silvertron had a second location, with an identical menu, at The Shops at Oak Park off Rocky Ridge Road in Vestavia Hills in the early 1990s. That location was managed by Charles Neugent.

On the morning of March 22, 2006 owner Alan Potts, was found dead of a gunshot wound to the head in the café's kitchen. The Jefferson County Coroner has classified the manner of death as "pending investigation". 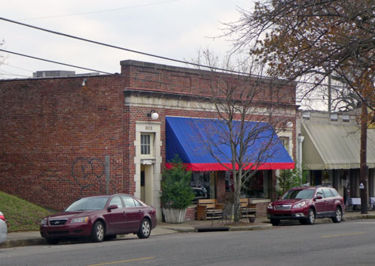 In July 2006 Silvertron's equipment was purchased by a group of investors which included Richard Cheaney and John Otey Hutchinson, owner of Otey's Tavern in Mountain Brook. The new owners re-opened the restaurant on August 29, 2006, but then closed again the following spring.

In late summer 2007 the restaurant was purchased by Marco Morosini. It reopened in November with chef Colin Grayson in charge of the kitchen. Morosini, a native of Bergamo, Italy, attempted to keep many of Potts' original dishes, and introduced new menu items. The restaurant also offered wine tasting classes. Morosini was elected president of the Forest Park-South Avondale Business Association, and was exceedingly generous with his time and resources spent in efforts to build up neighborhood assets like Avondale Elementary School, Avondale Library and Avondale Park, as well as to assist the less-fortunate members of the community. He worked with Don Lupo to create the "Heart to Table" program to deliver food from local restaurants to warming stations for the homeless.

In May 2018 Morosini announced that he and his family were closing the restaurant and moving back to Italy to care for a relative with a serious illness. The restaurant location was converted into General, an adjunct to the neighboring Shoppe garden and home store.