From Bhamwiki
(Redirected from Sloss Furnace)
Jump to: navigation, search 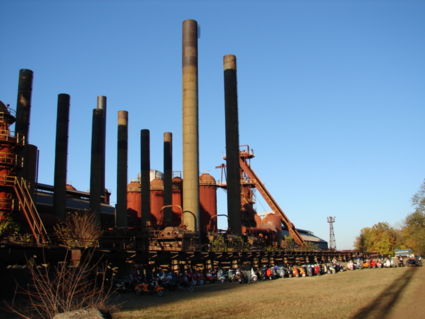 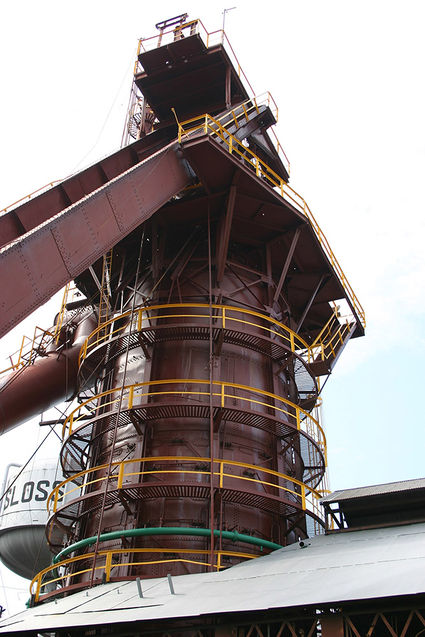 Sloss Furnaces is a National Historic Landmark in Birmingham. It was operated as a pig iron-producing blast furnace from 1882 to 1971. After closing it became one of the first industrial sites (and the only blast furnace) in the U.S. to be preserved for public use. In 1981 the furnaces were designated a National Historic Landmark by the Department of the Interior. The site currently serves as an interpretive museum of industry and hosts a nationally-recognized metal arts program. It also serves as a concert and festival venue. Current plans call for a $10 million program of accelerated restoration and construction of a new, larger visitor's center. The furnace site, along a wide strip of land reserved in Birmingham's original city plan for railroads and industry, is also part of a proposed linear park through downtown Birmingham.

Colonel James Withers Sloss was one of the founders of Birmingham, helping to promote railroad development in Jones Valley and participating in the Pratt Coke and Coal Company, one of the new city's first manufacturers. In 1880 he formed his own company, the Sloss Furnace Company, and began construction of Birmingham's first blast furnace on 50 acres of land donated by the Elyton Land Company for industrial development. The engineer in charge of construction was Harry Hargreaves, a former student of English inventor Thomas Whitwell. The two furnaces, of the Whitwell type, were 60 feet tall and 18 feet in diameter. The first blast was initiated in April of 1882. 24,000 tons of high quality iron were produced in the first year. Sloss iron won a bronze medal at the Southern Exposition held in 1883 in Louisville, Kentucky.

In 1886 Sloss retired and sold the company to a group of investors who reorganized it in 1899 as the Sloss-Sheffield Steel and Iron Company. Two new furnaces, Sloss Furnace No. 3 and Sloss Furnace No. 4, comprising the "North Birmingham plant, were built along Huntsville Road north of Village Creek between 1887 and 1889.

New blowers were installed in 1902 and new boilers in 1906 and 1914. Construction superintendent James Dovel implemented numerous improvements to the furnaces, and they were completely rebuilt to his specifications between 1927 and 1931. Through this aggressive campaign of modernization and expansion, including furnace and mining and quarrying operations all around Jefferson County Sloss-Sheffield became the second largest seller of pig-iron in the district and among the largest in the world. During this period the company built 48 small cottages for black workers near the downtown furnace—a community that became known as "Sloss Quarters" or just "the quarters". 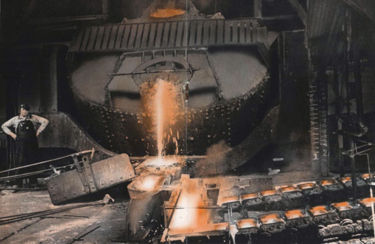 A mixing ladle in use at Sloss Furnaces in 1944

In 1952 Sloss Furnaces was acquired by United States Pipe and Foundry and sold again in 1969 to the Jim Walter Corporation, which closed it two years later and donated the property to the Alabama State Fair Authority for possible development as a museum of industry. In the meantime, the vacant plant was awarded an "Onion" in AIA Birmingham's annual "Orchids and Onions" program. The architects labelled it "an eyesore and a health hazard."

In 1975 the authority was still listening to business proposals ranging from a multi-million theme park to complete replacement by a parking structure. With no fully-financed proposals on the table, they delayed action hoping that the commodity price for scrap metals would rise enough to offset the cost of redevelopment of part of the site by selling off the rest. State Fair Authority chair Jack Beasley stated that simply cleaning and repainting the structure could cost in excess of $100,000 and would be a "waste of money."

In 1976 the authority determined that redevelopment was not feasible and moved forward with plans to demolish the furnaces. Local preservationists formed the Sloss Furnace Association to lobby for preservation of this site, which they considered to be of central importance to the history of Birmingham. The site was documented for the Historic American Engineering Record and its historic significance was detailed in a study commissioned by the city. Birmingham voters approved a $3.3 million bond issue in 1977 to preserve the site. This money went toward stabilization of the main structures, construction of a visitors' center, and the establishment of the metal arts program.

Preservation and restoration work continues at Sloss and funds are being raised for a major expansion of the interpretive facilities in a new visitor's center. The site is proposed to become part of a linear park running east-west through downtown Birmingham along the route of the "Railroad Reservation", which was a strip of land zoned for industrial development in Birmingham's original city plan.

Several annual and bi-annual festivals are held at the site. The Magic City Brewfest, Stokin' the Fire BBQ Festival, Muse of Fire, Magic City Blues Fest, Furnace Fest and Southern DisComfort have all used the venue. Brewfest organizers postponed their planned 2017 event due to an unanticipated tripling of rental fees from the City of Birmingham.

On June 1, 2017 a project to create "Spark Sloss", which would bring back an artist-in-residence combining metal arts with robotics and industrial design was awarded a $100,000 "Our Town" grant from the National Endowment for the Arts. In September 2019 the Montgomery-based Equal Justice Initiative and its affiliated Jefferson County Memorial Project placed a historical marker at Sloss Furnaces to memorialize Jake McKenzie and Tom Redmond, two African-American men who lost their lives to racial violence in the 1890s at Brookside, a Sloss-Sheffield mine in western Jefferson County.

Two ghosts are said to haunt the furnaces site. Theophilus Jowers, a foundryman who fell into molten iron at the Alice Furnace is said to have relocated to Sloss after that furnace was shut down. A second ghost, that of a pregnant young girl who committed suicide by leaping into the iron at Sloss, is said to appear in the form of a deer during big celebrations at Sloss.