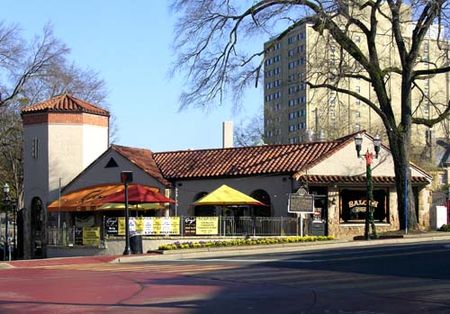 Spanish Stores with Saloon and Chez Fonfon in December 2009.

The Spanish Stores is a row of commercial spaces constructed on the southeast corner of Five Points South in 1926 by the heirs of R. S. Munger, founder of the Continental Gin Company and one-time owner of the Mirabeau Swanson residence, which he had moved from 5 Points Circle to a site near St Mary's-on-the-Highlands Episcopal Church.

Before his death in 1923, Munger amassed several properties surrounding the 5 Points Circle with the aim of redeveloping them for commercial use. His children realized the plan and commissioned a fashionable "Spanish Colonial" design for their first project, known as the Spanish Stores. The architect was Miller & Martin of Birmingham. The design was praised for its "unusually attractive plan for the development of a corner lot," in the pages of Southern Architect and Building News.

The development was marked by innovations such as electric streetlights and automobile parking set-backs in the curb. The Exchange Security Bank of Birmingham was the prime tenant, occupying the front space at 1102 20th Street South. Other tenants were carefully selected by the Mungers to preserve a mix of desirable commercial amenities. They stipulated that no tenant could serve liquor. In 1930 the building's tenants included Lifskitz Delicatessen, the Peerless Laundry, Martin's Flowers, Waggoner's Sandwich Shop and Nunnaly's. Later that year the building was extended eastward to accommodate the Mary Aust Tea Room.

Since 1980, the building has been owned by Bob Moody, whose interior design office was already located there.