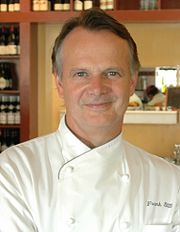 Frank Stitt III (born 1954 in Cullman) is an award-winning chef and owner of Highlands Bar and Grill, Chez Fonfon, Bottega Restaurant, and Bottega Café, all located in Southside Birmingham.

Stitt, the son of a surgeon, grew up in Cullman. After graduating high school in 1972 he spent a year in Europe. He began his studies at Tufts College in Boston, Massachusetts, then transferred to the University of California at Berkley as a philosophy major. It was through philosophical treatises on food by authors such as Richard Olney and Elizabeth David that he developed an interest in cooking. He tried unsuccessfully to apprentice himself to area chefs, until Fritz Luenberger brought him on at his Casablanca restaurant.

Stitt soon worked his way into the kitchen at Alice Waters' Chez Panisse. From her he was introduced to Olney, who was living in Provence and compiling a multi-volume TIME/LIFE series on cooking. He became Olney's assistant. While there he met other notable chefs and food writers such as Julia Child, Jeremiah Tower, and Simone Beck. He also took menial jobs, such as grape harvesting, that would allow him to learn more about foods. While there he began working on ideas for marrying Southern foods with French cooking techniques that would set the tone for his flagship restaurant.

After leaving France, Stitt worked in the Caribbean for a while before returning to Alabama. He took a job as a sommelier at a wine shop and as an assistant food and beverage manager for Hugo's Rotisserie at the Hyatt House hotel while teaching cooking classes privately. He was unable to interest local banks in loaning him money to start his own restaurant, so he approached friends and family. His mother re-mortgaged her house to help out, and Highlands Bar and Grill opened in November 1982. The restaurant quickly became a success, allowing Stitt to repay his investors within four years.

Stitt and his wife, Pardis, have been recognized by many publications and have won numerous national culinary awards. He was named the "Best Chef in the Southeast" in 2001 by the James Beard Foundation and was a 2008 finalist for the foundation's national "Outstanding Chef" award. He has also been recognized with a Lifetime Achievement Award from the Southern Foodways Alliance and his first cookbook, Frank Stitt's Southern Table has been a best-seller. Stitt was inducted into the Alabama Academy of Honor in 2009. In November 2019 a sculpture entitled, "Frank's Table" was dedicated at the east end of the Rotary Trail on 1st Avenue South. The work was was commissioned as part of the Alabama-Mississippi Chapter of the National Multiple Sclerosis Society's "Legacy of Leadership" program to honor Stitt.