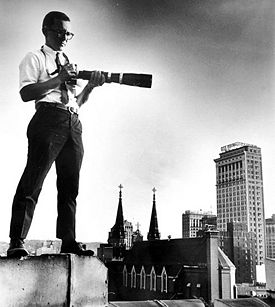 James Issac "Spider" Martin (born April 1, 1939 in Fairfield, died April 8, 2003 in Blount Springs) was a press photographer for the Birmingham News, best known for his documentary photographs of the Civil Rights Movement.

Martin was born in Fairfield. Though he never grew much taller than 5 feet, he did play high school football at Hueytown High School. He later worked as a photojournalist for The Birmingham News and as a commercial photographer. Between 1965 and 1973 Martin completed fashion shoots for several national magazines like McCall's, Womens Wear Daily, and Playboy.

Martin killed himself on April 8, 2003 at his home in Blount Springs. His daughter, artist Tracy Martin, memorialized him in an installation for the first Dia de los Muertos observance at Bare Hands Gallery in November, 2003.

The UAB Visual Arts Gallery observed the 40th anniversary of the "summer of love" in 2007 by showcasing some of Martin's never-before-seen fashion photographs in a show curated by Brett Levine and Mindi Shapiro.