Spirit of the American Doughboy 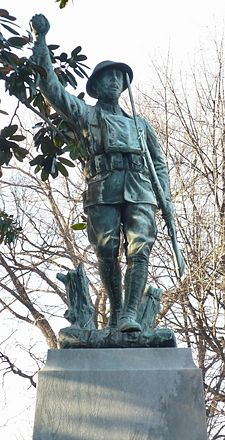 The Spirit of the American Doughboy (or World War I Memorial) is a life-size copper sculpture of a World War I "doughboy" soldier standing at the crest of a barricade with a rifle in his left hand and a grenade in his raised right hand. There are copies of the work, created by Ernest Moore "Dick" Viquesney of Americus, Georgia, in around 140 U. S. cities, including Birmingham, Bessemer and Anniston. Viquesney's original is in Nashville, Georgia.

The Anniston statue was dedicated on May 30, 1922 in the median of Quintard Street. The plaque, which was donated by Lee Brothers Foundry, reads "Erected by the Anniston Post, American Legion, to the Calhoun County men who served in the World War."

Bessemer's statue sits on a sandstone plinth in DeBardeleben Park. It was originally dedicated on Armistice Day (November 11), 1922 at the corner of 19th Street North and Carolina Avenue, but was later moved into the park. There are four plaques. The primary inscription reads: "To the memory of our World War heroes who died that civilization might not perish from the earth." The left side bears the names of 30 soldiers who died during the war. The right side contains 14 more names, of "colored" soldiers who met the same fate. The rear plaque notes the sculptor and acknowledges a 1999 restoration, "So that future generations may remember the struggles and bloodshed that preceding generations endured to protect the peace and liberties we hold dear."

The "rediscovery" that Bessemer had an original Viquesney took place in 1992. Seven years later, with funds from the City of Bessemer and the State of Alabama Historical Park and Historical Site Maintenance Program, the Karkadoulias Bronze Art Company of Cincinnati, Ohio was hired to restore the work at their studios. The statue was reinstalled on November 11, 1999. Retired Admiral Lee Bains delivered a keynote address.

Bessemer approved up to $2000 to hire sculptor Branko Medenica to make repairs and refinish the sculpture in 2015.

Birmingham's sculpture sits atop a limestone pedestal at the South entrance of Linn Park, flanking the later Memorial to the Spanish American War. It was dedicated on November 11, 1923 in the plaza outside Municipal Auditorium, and later relocated.

The plaque was removed from the statue's base at some time in late 2010, perhaps at the same time that copper thieves destroyed the Birmingham Christmas Tree standing nearby.