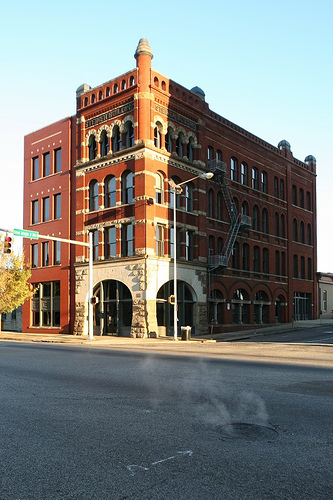 The Steiner Building in November 2007, photographed by Wally Argus

The Steiner Building is a four-story office building located at 2101 1st Avenue North at the foot of the Rainbow Viaduct, on the southeast corner of the intersection with 21st Street North. The red brick building, constructed in 1890 in the Richardsonian Romanesque style, was designed by architects Charles and Harry Wheelock for the Steiner Brothers Bank, owned by Sigfried and Burghard Steiner.

The building was constructed on the 25' x 100' site of the William Nabors residence, considered to be the first house built within the original limits of Birmingham. The bank paid $21,760 for the property and hired Belton Gilreath's Decker-Gilreath Construction Co. to erect the new building.

The front corner of the narrow building is expressed as a tower capped with a pediment and thick corner piers. The ground floor entrance lobby is marked by large sandstone arches, set into a boldly-rusticated base level. The triple openings above are extended across two floors with a spandrel in between, while the upper floor is divided into four arched openings, separated by round colonnets. The name "STEINER BUILDING" in raised block letters stretches across the front facade, just below the cornice. The building boasted the first hydraulically operated elevator in the state. 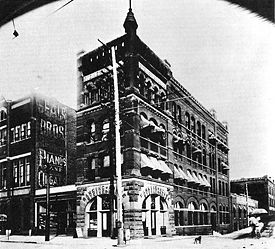 The Steiner Building in 1910

The Steiner Brothers Bank relocated to 3rd Avenue North in 1963, and, after a brief vacancy, the building became the home of the newly-formed American National Bank, the first bank chartered in the state with a multi-racial board of directors. The new company erected a modern gold-tone perforated aluminum screen over the Romanesque facade. Within a few years, however, a federal indictment against the bank's president Oscar Hyde, led to a change in ownership and the re-naming of the bank to the National Bank of Commerce.

The building remained mostly vacant, at one point housing the offices of the Jefferson County Historical Society. The Steiner Building was added to the National Register of Historic Places on July 25, 1974.

In 1979 it was purchased from John and Stanley Wilson III by Steiner Landmark Ltd. (SLM LLC), a partnership of Hubert Goings of Engel Real Estate, the investment firm of Porter White & Company, and the architecture firm of Kidd, Wheeler & Plosser. Birmingham's Historical Preservation Authority assisted with financing the building's restoration, partly through a federal Urban Development Action Grant. A warehouse building immediately behind the Steiner Building, facing Morris Avenue was also redeveloped and sold to an accounting firm.

Kidd, Wheeler and Plosser, now known as KPS Group designed an addition to the east side of the building, nearly doubling its interior space. The addition, which uses similar colors and composition, stands as a modest complement to the original structure. Slaughter Hanson, an advertising agency, also had space in the building until they relocated to Vestavia Hills in 1999.

In June 2014 the building was purchased by Tom and Bart Crawford for $1.825 million to serve as headquarters of the Title Group. The real estate firm of Marcus & Millichap moved their offices to the Steiner Building in 2015.