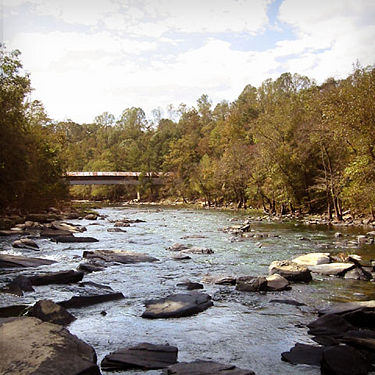 Entrance to Swann Bridge in Nov. 2012. Photo by Robert Matthews.

The Swann Bridge (sometimes called Joy Bridge or Swann-Joy Bridge) is, at 324 feet, the longest covered bridge in Alabama. Completed in 1933 with its roadbed about 27 feet above the water, the triple-span traverses the waters of the Locust Fork of the Black Warrior River just below Bullard Shoal and above Big Scirum Creek. The bridge was constructed to provide access to the Joy community from Swann Farm.

Swann Bridge is located on Swann Bridge Road near Alabama Highway 79 just west of Cleveland. it is one of three remaining covered bridges in Blount County, all built by Forrest Tidwell and his nephew Zelmer. The elder Tidwell earned $2.75 per day for his efforts, while his carpenters earned $1.75 and his laborers $1.25. The lumber was supplied for $14 per 1,000 board feet.

Like their other bridges, the timber frame is constructed in the "Town lattice truss" style, using small pieces pegged together to form the structural walls on either side of the 14 foot-wide roadway. The intermediate piers are constructed of concrete. The original wood-shingle roof has been replaced by galvanized metal. The structure was added to the National Register of Historic Places on August 20, 1981.

A network of trails on the western side lead to the stream banks below. Not far downstream from the bridge a stone cliff has been carved by the river. The area is popular with picnickers and ATV riders.

The bridge, along with two others, was closed to vehicular traffic in 2007 as the county worked to secure funding for structural analysis and conservation. Bob Smith Construction began the restoration work in December 2011 and the bridge re-opened after a ceremony on October 22, 2012.