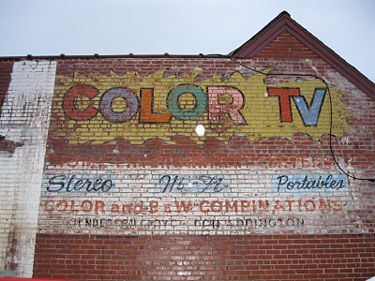 Not to be confused with Homewood Electronics Co..

Television Sales and Service was a television sales and repair shop that opened at 1003 Oxmoor Road in Homewood in 1966, the same year the three American television networks, ABC, CBS, and NBC, began airing all prime-time shows in color. It was owned by Henderson Floyd and Don Addington and closed after only one year in business.

The owners had a colorful "Color TV" ad painted on the east side of the building. It was later covered by a billboard which protected the ad from fading for many years. The billboard was removed in the 2000s, revealing the ad again, now on the side of Edgewood Frame Shop.