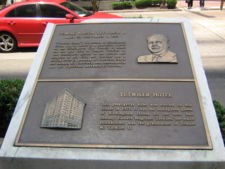 Tutwiler was the son of Temple Tutwiler and grandson of Edward M. Tutwiler. When he was twelve he voyaged with his family on Cunard's RMS Samaria to tour England and France for three weeks. They returned to New York aboard the RMS Aquitania.

Tutwiler volunteered for parachute service in the U.S. Army on April 20, 1942. He was commissioned as a 2nd Lieutenant by October and assigned to the 508th Infantry Regiment as a member of the cadre team. He was promoted to 1st Lieutenant by March 1943 when he was transferred to the regimental headquarters. He was wounded in action on June 6, 1944 and evacuated from the field, but returned to duty on July 14. He was captured after a combat jump into the Netherlands on September 17, 1944 and remained prisoner until his camp was liberated in May-June 1945.

He married the former Margaret DeBardeleben on December 30, 1949, and was the father of Lucile, Temple II and Elisabeth Tutwiler.

Tutwiler is remembered for his devotion to civic projects. He is largely credited with the project to create Birmingham Green on 20th Street North, sometimes called "Tutwiler Green".

Tutwiler died in March 1982 and is buried at Elmwood Cemetery.