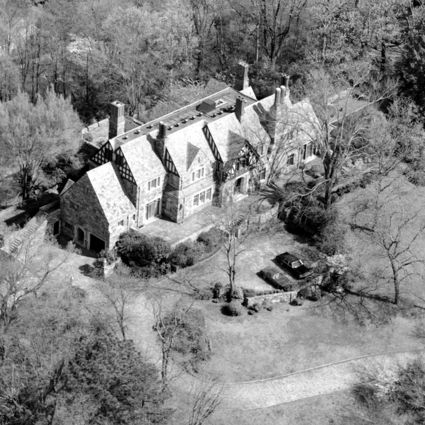 The Swann residence, photographed in 1993

The Theodore Swann residence, also called Chaucer Hall or Swann Castle, is an English Tudor-style mansion located on the crest of Red Mountain at 3506 Redmont Road. It was constructed from 1927 to 1930 for industrialist Theodore Swann. The five-story mansion was designed by William Warren of Warren, Knight and Davis, and was the largest and most highly-ornate residence in Birmingham when it was constructed.

During the Great Depression the Swanns lost the house to foreclosure and moved to Niazuma Avenue. Over the years various misfortunes befell the occupants of the house, inspiring superstition. It was bought in 2003 by Daniel and Brooke Coleman who commissioned a major exterior restoration and conservation project.

From the street, only two storys are visible. Two underground levels give access to terraces in the rear of the property, overlooking Jones Valley. A finished attic fills the multi-gabled roofline, which is punctuated with five large pairs of Welsh-made terra-cotta chimney pots.

Swann's travels through England had inspired him to reproduce features of manor homes and castles he had seen there. The exterior of the house is clad in locally-quarried sandstone with limestone trim (it had been rumored that he had purchased stone from William Randolph Hearst). Leaded-glass windows are hung in bays trimmed with hand-hewn timbers. The ornamented gutters are cast in solid lead. Terraces are paved with bluestone and the slate roof graduates from thick, heavy slabs at the eaves to thinner shingles at the ridges.

The decorating scheme for the main floor was assisted by Lyman W. Cleveland of Philadelphia. A Grinling Gibbons-inspired dining room recreated a Georgian-style parlor with Greek key doorways and a Sterling silver chandelier. The adjacent breakfast room was in the Adam style with a black and white checkered marble tile floor.

The other principal rooms were in a darker, more Medieval style, with large stone fireplaces, leaded glass windows made by the D'Ascenzo Studios of Philadelphia, and rich carved wood paneling. The library features stained glass windows depicting various pilgrims from Chaucer's "Canterbury Tales" as well as hidden bookshelves.

The upper level housed the bedrooms, baths and numerous storage areas, some of which were connected by secret passageways.

The "Norman Room", on the lowest level below a terrace, was designed to reproduce exactly the T-shaped great hall from the 9th century Castle Hedingham in Essex, a keep built by Alberic de Vere, the son-in-law of William the Conqueror. Swann sent engineers to England to produce detailed drawings of that and other rooms he admired. Using postcards as a guide he commissioned reproductions of trophies, arms and banners used by knights of William the Conquerer.

Sharing this lower-level was a multi-room English tavern with low, beamed ceilings and artificial windows with lights that could be adjusted to mimic different times of day. A replica of Cardinal Richelieu's kitchen, with a massive turning spit, completed the theatrical effect.

The servants' rooms were arrayed across the lower level and in attic areas. The main kitchen was a marvel of modern technology with fresh air vents for the produce storage, refrigerated cabinets for cold storage, hot and cold running water, and pressurized water for use in case of fire. The butler's pantry featured stainless steel sinks and a communications board with indicator lights and an intercom. Other new technologies put into use included a residential elevator, a security alarm, a central vacuum and a television antenna (about 20 years before any television broadcasts were available in Birmingham).

The terraces and grounds were landscaped by William Henry Kessler with sophisticated drainage and irrigation.

Swann, who had risen from a humble background to great wealth through his work in chemical engineering for industry, commissioned the magnificent house as testimony to his rise in status. During his extensive travels he collected notes, photographs and postcards of features he wanted to reproduce in his own house. In 1925 he began working with Warren, Knight and Davis to put his ideas to paper.

Ground was broken on July 20, 1927. Soon the excavations uncovered a human skeleton which was presumed to have belonged to a Native American. Swann retrieved the skull and had it fashioned into a cigar humidor.

Construction proceeded over the next two years with Swann and his wife visiting the site often. They documented the late Spring and early Summer of 1928 with a motion picture camera, capturing the placement of concrete by wheelbarrow, the endless work of stonemasons, and the erection of the pitched steel girders for the roof frame. The total cost of construction when the keys were turned over in 1929 exceeded $600,000.

The grand debut of the Swann Castle came in 1930 with opera soprano Grace Moore serenading guests from the landing of the grand stairway which descended into the Norman hall. Swann entertained the members of the 1931 University of Alabama football team after their 24-0 victory over Washington State in the Rose Bowl.

Swann's financial standing dropped precipitously during the Great Depression. He sold his company in 1935 and declared bankruptcy in 1944. The couple closed off the upper levels and, according to legend, Swann hunted the slopes below for rabbits to eat. Unable to keep up their payments, the bank foreclosed on the house and set the market value of the property at $150,000.

Theatre mogul and developer Newman Waters Sr purchased the mansion after foreclosure for $57,500, but remained for only a few years. Joseph and Carrie Lea Franklin purchased it in the 1950s and sold it to Joseph W. Simpson in the late 1960s. Joseph's wife, Virginia was found murdered at the house on August 31, 1977. Nothing was reported stolen and the murder remains unsolved. Mr Simpson died soon after and the house was left vacant.

Some years later the property was acquired by Prenitce and Josie Knapp. It was later owned by Anthony Fant before the Colemans purchased it in 2003.

After interviewing several firms, the Colemans selected Jack Pyburn Architects of Atlanta to oversee a large-scale restoration of the house's exterior. The restoration focused on stemming failures in the roof and terrace drainage. The slate roof was replaced in its entirety with the huge chimney-pots carefully repaired in situ. The exterior stonework was repointed while flashings and trim were replaced where necessary. The window sashes were sent to New Jersey for re-leading and the terrace pavers were taken up to allow for new waterproofing membranes to be installed before they were meticulously relaid.

Brice Building Company served as general contractor with Masonry Arts and El Dorado Metals of Arkansas working on the stone and gutters, respectively.