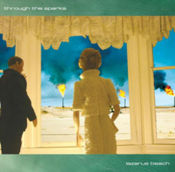 Through the Sparks is a rock band formed in Birmingham in 2004. It is composed of long-time friends and multi-instrumentalists Jody Nelson, James Brangle, Greg Slamen, and twins Nikolaus and Thomas Mimikakis. They record in a garage dubbed "Alamalibu Studios" and are often joined on record by members of the Chad Fisher Group and others. They have released three full albums on Skybucket Records and also record regular singles which are distributed to their newsletter subscribers.