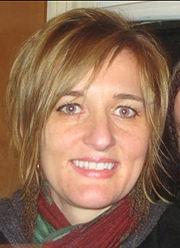 Véronique "Vero" Vanblaere (born June 5, 1971 in Braine-l'Alleud, Belgium) is a visual artist and the owner of Naked Art Gallery in Forest Park.

Vanblaere visited Alabama first as an exchange student at Hewitt-Trussville High School. After she won her green card in 1996, she returned to the city where she had forged friendships. She got a job at an advertising firm and pursued artwork in her spare time. She opened Naked Art with friend Jennifer Staib two years later. The gallery, which specializes in artist-made functional items, moved from 1st Avenue North to the house formerly occupied by Zoe's Forest Park in 2004. Vanblaere also helped expand ArtWalk in the loft district. She became a naturalized citizen in 2010.

Trained in graphic arts, Vanblaere uses mixed media to create works that convey mood and feeling through color, collage and borrowed imagery. In addition to panel pieces, she is known for her hand-made lamps and light switch plates.