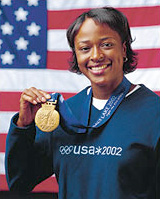 Vonetta Flowers (born Vonetta Jeffery October 29, 1973) is a track and field athlete who won the Gold Medal in the two-woman bobsled event at the 2002 Winter Olympics in Salt Lake City, becoming the first Alabamian and the first Black woman to medal in the Winter Olympics.

Vonetta Jeffery was born in Birmingham and impressed Marvel City Striders coach DeWitt Thomas when she was 9 years old during sprint tryouts at Jonesboro Elementary School. She graduated Jackson-Olin High School in 1992 and accepted a Track and Field scholarship to UAB. During her college career she captained UAB's team for four years and racked up 35 conference titles and 7 NCAA All-American honors.

In 1996 and 2000 Jeffery qualified for the summer Olympic Trials, but did not earn a spot on the U. S. Track and Field team, placing 12th in the long jump. During this time she married fellow track athlete Johnny Mack Flowers, who brought home a flyer advertising tryouts for the U.S. bobsled team. She accompanied him to a tryout and, when he pulled his hamstring, she stepped into the competition and won a spot. While training and competing with the team she quickly rose to the #1 brakewoman's spot. With driver Jill Bakken, the U.S. team won their event at the Olympics for the first time since 1956. The pair were selected to carry the American flag during the closing ceremony.

Upon her return to Birmingham, Flowers was given a celebration at Bartow Arena, presented with the inaugural "Live the Dream Award" by the Birmingham Area Chamber of Commerce, and given a key to the city by Mayor Bernard Kincaid.

On August 30 of that year she delivered twin boys, Jaden Michael and Jorden Maddox. Five weeks later she started training again at Hoover High School and resumed competition in 2003 with driver Jean Prahm. Flowers and Prahm competed in the 2006 Winter Olympics in Turin, Italy, finishing sixth.

Flowers wrote an account of her path to the medal stand with co-auther Terry Whalin, published in 2005.

On February 14, 2010 Flowers and fellow Olympian Peggy Fleming were both mildly injured when a van traveling with Vice-President Joe Biden's motorcade was involved in a collision during the Winter Games in Vancouver, Canada.