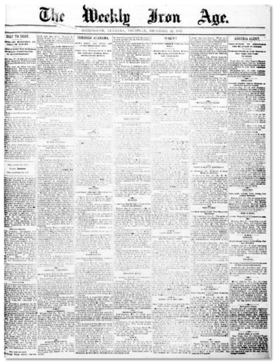 The Weekly Iron Age, originally the Birmingham Iron Age, was a weekly newspaper published on Thursdays from February 12, 1874 to at least November 1888. It was started by Willis Roberts of Roberts & Son Printers, later joined by Frank Duval, Charles Roberts, and A. B. Persinger. The paper's offices and press were originally located "on 20th Street over Elyton Land Co.'s office" on the northeast corner of Morris Avenue.

The newspaper saw many ownership turnovers in its early years. Persinger, who apparently only had interest in the printing press and not the newspaper, left for Tuscaloosa in April 1874, just two months after the paper's start. In June, Charles Roberts sold his interest to F. M. Grace who continued the paper with Duval. Grace oversaw the editorial portion while Duval handled the business department (subscriptions and advertising) and local news. Just three months later, in September, Grace bought out Duval, becoming sole owner and editor. A year later, in September 1875, Roberts returned to become publisher and took control of the business department while Grace continued as editor. Additional ownership changes continued after that.

In the December 1, 1881 edition, owners W. C. Garrett and Frank Evans announced they were launching a second, daily newspaper called The Daily Age. Within the announcement, to help distinguish between the two papers, the Birmingham Iron Age was referred to as the Weekly Iron Age, but it was not until the May 1, 1884 edition that the paper changed its nameplate to read The Weekly Iron Age. In September 1882, the partners reorganized the two papers under the Iron Age Publishing Company with Evans as president and J. L. Watkins as editor in chief. Charles Hayes joined the firm as business manager in 1885. At that time the Daily Age was an 8-page paper with a 12-page edition on Sundays and was the only newspaper in the District printing dispatches from the Associated Press. The Weekly Age was an 8-page publication issued on Thursdays.

In 1886, the company built the Iron Age building at 212 20th Street North and moved their offices there. In 1889 the Weekly Herald appeared under the aegis of the Age-Herald Company.

Among the columns printed in the Weekly Iron Age were Mary Gordon Duffee's Sketches of Alabama, which ran from 1886 to 1887.