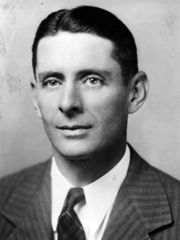 William Stanley Hoole (born May 16, 1903 in Darlington, South Carolina; died December 12, 1990 in Tuscaloosa) was a teacher, librarian and historian. He was the long-time director University of Alabama Library and edited the Alabama Historical Association's Alabama Review from 1948 to 1967.

Hoole was the sun of William Brunson and Minnie Eva Powers Hoole of Darlington, South Carolina. He attended the St John's Academy in Spartanburg and graduated from Wofford College. After working for a couple of years as a salesman and part-time teacher, he returned to St John's as an English teacher and athletic director. He completed a master's in English at Wofford in 1931 and married the former Martha Anne Sanders that same year.

Hoole went on to complete a PhD in English at Duke University in Durham, North Carolina in 1934. He taught briefly at the Alabama Teachers College in Jacksonville. He then moved to Birmingham-Southen College and was awarded a Rockefeller Grant to study library science at the University of Chicago's Graduate Library School and serve as the college's "Professor of Books". From there he eventually took charge of the college's M. Paul Phillips Library, where he encourage recreational reading and implemented a reader's advisory service. He also promoted reading to the public through weekly talks on WBRC-AM and reviews and columns published in Alabama: News Magazine of the Deep South and The Birmingham News.

In 1937 Hoole moved to Waco, Texas as librarian for Baylor University, where he spent two years marked by significant improvements to the university's library system. He continued his public advocacy with newspaper columns and radio talks and lobbied for expansion of public libraries in Texas. In 1939 he accepted a position heading the Department of Library Service at the North Texas State Teachers College in Denton. While there he overhauled the library science curriculum and streamlined and expanded library services.

In 1944 Hoole returned to Alabama as director of libraries at the University of Alabama in Tuscaloosa. He reorganized what had been a disjointed system of independent departmental libraries and increased the professional standing of library staff. He guided the department into membership in the Association of Research Libraries. He also shepherded the collection of non-book items such as audio recordings, maps and microforms, more than sextupling the total number of catalogued items during his 27-year tenure. He was promoted to "Dean of Libraries" in 1969.

In 1970 Hoole helped create the University's Graduate School of Library Service. He retired as library director in 1971, but continued to teach until 1973. In his retirement, Hoole was granted honorary degrees by Wofford and the University of Alabama. The UA Library named its special collections department in his honor in 1977.

On May 30, 1970, ten years after his first wife, Martha, died, he married Addie Shirley Coleman.

Throughout his career, Hoole was a prolific writer. In addition to his hundreds of book reviews and journal articles, he produced over 50 books, some under the pen name Will Stanley. He edited the South Atlantic Bulletin, The Southeastern Librarian, and Confederate Centennial Studies as well as the Alabama Review. He studied English college libraries under a Fulbright Scholarship and served as a research consultant for a Congressional subcommittee on special education. Hoole also served as president of the National Committee on Libraries.

Hoole died in December 1990 in Tuscaloosa and was buried in Darlington, South Carolina.