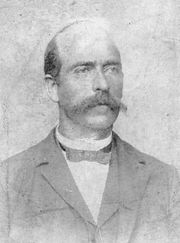 William Angelo Merkel (born 1854; died 1918) was a civil engineer for the Elyton Land Company who was involved in the design and construction of the Birmingham Water Works Tunnel and supervised the construction and operation of the Cahaba Pump Station. Merkel and his family resided near the pump works. The community that grew up in the vicinity was named Merkel after him.

Merkel is buried at the Cahaba Heights Methodist Church Cemetery.