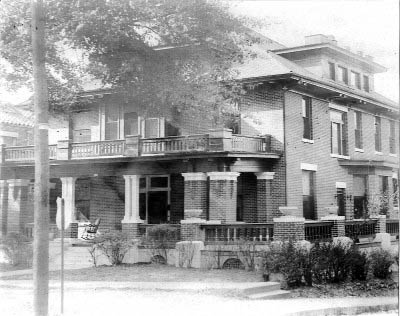 The William Merritt residence is a 7,000 square-foot two-story residence constructed in 1908 for William Merritt and his family on a 13,600 square foot lot at 2220 Highland Avenue on the corner of 11th Court South in Southside. It currently houses the Galley and Garden restaurant.

Merritt, a native of Georgia, died in December 1909, shortly after moving into his new home. His widow, Mary, and eight children remained in the house until her death in 1913. Some of the children remained in the house. In 1920 Charles Merritt shared ownership with with Marvin Wise, whose widow, Sallie Wise, took over the home, as well as his chain of theaters, at his death in 1925. She provided employment for some of the Merritt brothers and also took in boarders as she continued to occupy the house into the 1970s.

After she moved to a retirement home, the residence was converted into an attorney's office, and later a 275-seat restaurant called The Pillars, and later the Merritt House. In 1999 the restaurant took its current name. In 2005 restaurant operator Darryl Borden purchased the property at auction, closing his Bombay Cafe to focus on Veranda.