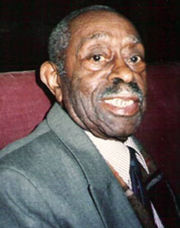 Driver was the son of Wilson and Lizzie Driver. He was inspired to take up drumming when he saw George Earl "cakewalking" in a street parade. He made a drum out of a washtub and taught himself to beat out a rhythm while he sang. His parents disapproved of his playing, especially popular syncopated music. When he enrolled at Industrial High School in 1918 there were already too many drummers in Fess Whatley's band, so he took up trumpet and learned to read music. He kept to drums, however, and was invited to play in Whatley's Saxo Society Orchestra (later the Jazz Demons) which toured the region, mainly for for white audiences.

He later played on the Vaudeville circuit before settling in as the drummer for Birmingham's Famous Theater. Most of the films that played at the Famous were accompanied by piano and drum only, with the drummer singing when needed. For "event" films, other instruments might have been added. It was while there that Driver met a young Jo Jones and encouraged the assertive upstart drummer.

Driver with Whatley's Saxo Society Orchestra in the 1930s

Driver and his wife, Lena, had two daughters, Wilsonia (who became well known as poet Sonia Sanchez) and Pat. Lena died during Pat's birth in 1935. The girls went to live with Driver's mother while he pursued a living in New York. He joined Jones and another colleague, Sid Catlett, in Harlem and began working as a teacher and playing gigs in the evenings. When his mother died in 1940, he sent the girls to live with other relatives for a few years. In 1943 he decided to set aside the possibility of a lucrative touring career, instead taking work with the Chock Full O' Nuts coffee company and taking custody of Sonia and Pat with his third wife. He worked at the company for thirty years, retiring as a supervisor. He also played when he could. A regular gig at the Silver Slipper in Greenwich VIllage financed Sonia's bachelor's in political science at Hunter College.

In retirement, Wilson remained well known in Harlem as an "elder statesman" of music. He was inducted into the Alabama Jazz Hall of Fame in 1980 and died in 2000. Driver is buried at Mount Hope Cemetery in Hastings-on-Hudson, New York.