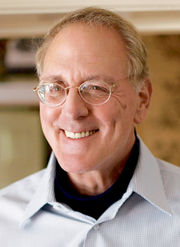 Winston Francis Groom Jr. (born March 23, 1943 in Washington D.C.; died September 17, 2020 in Fairhope, Baldwin County) was a novelist and writer, best known for his 1986 novel Forrest Gump, which was adapted into a feature film.

Groom grew up in Mobile County and attended University Military School (now UMS-Wright Preparatory School). He planned to follow his father into practicing law, but became interested in a career in writing while editing a literary journal at the University of Alabama. He graduated in 1965 on a R.O.T.C. scholarship and spent two years in the U.S. Army, serving with the 4th Infantry Division in Vietnam. He was discharged in 1967 with the rank of Captain.

Groom worked as a legal reporter for the Washington Star. He married the former Ruth Noble in 1969 and divorced her in 1974. He resigned to focus on writing, and at Willie Morris' invitation he moved to New York City in 1976. His first novels, Better Times Than These, and As Summers Die, were published in 1978 and 1980. Both novels involved soldiers in the Vietnam War. He followed up in 1984 with Conversations with the Enemy, a non-fiction book co-authored by Duncan Spencer about an escaped prisoner of war who managed to return to the United States, only to be charged with desertion. That book was named a finalist for a Pulitzer Prize.

In 1985 Groom moved back to the Mobile Bay area and began working on Forrest Gump. The novel became a best-seller in 1986 after Robert Zemeckis' feature film, starring Tom Hanks, became a major hit for Paramount Pictures. He remarried that year, to Anne Clinton Bridges, with whom he had a daughter, Carolina.

Most of his work in the 2000s was well-received historical book for general readers. His last novel, El Paso, was published in 2016. Groom spent his later years with his third wife, Susan, in Point Clear, Baldwin County. He was presented with the Harper Lee Award for Alabama's Distinguished Writer of the Year in 2011 and was inducted into the Alabama Writers Hall of Fame in 2018.