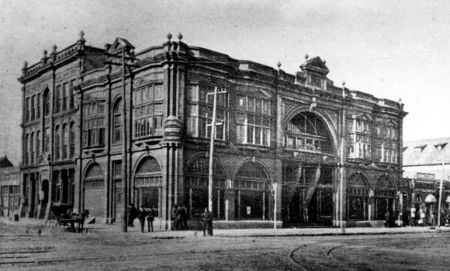 The Wright Building, later also called the Woolworth Building, was a large commercial building constructed in 1883 on the northwest corner of 3rd Avenue North and 19th Street.

As soon as it was constructed, the second floor of the Wright Building were leased to the Birmingham Board of Education for administrative offices and for the classes of the city's Central High School, which had previously been held in the Exposition Building in Capitol Park. Superintendent of Schools John Phillips established a lending library for faculty in students in a room adjoining his office. After odors from a steam laundry on the ground floor forced the high school to relocate to the Enslen Building in 1890 the library was opened to the general public on a subscription basis, and served as the first Birmingham Public Library. The library moved to the recently-completed Birmingham City Hall in 1904.

The building was used as the home of the Birmingham Post Office until the new U.S. Court House and Post Office was completed in 1893. In 1887 Chas W. Anson & Co. printers and publishers and W. L. Chambless, undertakers were located in the building. Architect D. A. Helmich advertised his services from a corner sign on the building.

It was known as Housman's Pharmacy in 1903, and as Parker's store later in that decade. Gunn's Pharmacy took over the building in 1908.

The building has since been torn down.