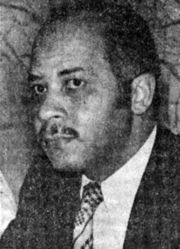 The 1979 Birmingham inaugural address was the first speech delivered by Mayor Richard Arrington, Jr upon being sworn into office as the city's first African-American mayor on November 14, 1979.

Four years ago, at the inauguration ceremonies for City Council members, I briefly related the story of my parents' decision to come to Birmingham. I want to repeat that story here today because of what I see as its relevance to this occasion.
Sometime in 1940 my father, who had spent his adult life as a sharecropper in Southwest Alabama, decided that better fortunes for his family lay in coming to Birmingham.
He had no money to pay the bus fare for the 110-mile trip from Livingston, Ala. to Birmingham. So he asked his brother, who had already come to Birmingham to work, to send him bus fare for the trip.
He came to this city and found a job in the steel mill and immediately moved his family to a duplex house in the western section of the city. It seems now like not only an interesting but a unique story when seen in the light of today's historic occasion.
But on reflection, it's not a unique event, for in the history of this city it has been repeated many times by family after family.

The story of my parents' quest for a better quality of life and their faith that it could be found in this valley is the story of many other families who came to Birmingham seeking a little better chance. And though they have not all fared as well as they had hoped, thank God that the overwhelming majority have seen many of their dreams realized. In this valley they have been able to make a decent living, to educate their children and to watch this valley grow; and for some, like my parents, to see their children attain positions of responsibility they never dreamed of.
Since its founding in 1871, Birmingham with its God-given natural resources has faced and overcome several crises in its young lifetime. At times its future seemed to hang by the most tenuous thread but its people held on with goodwill and tenacity. Some watched it overcome a cholera epidemic when it was only two years old. Others witnessed it struggle through the Depression years and most of us here today watched it come to grips with racial strife. From each crisis the city rebounded, each time stronger than before.

With all of its natural resources, its most important resource has always been and remains even today, its people and their endurance.
I approach this historic occasion humbly but with keen awareness of its significance. My election as the first black mayor of this city is to me and many others an example of the reality of the American dream, the depth of the American ideals and the commitment of Birminghamians to the basic tenets of our democracy.
The decision of a majority of the voters in Birmingham to elect a mayor who is black has focused national and international attention once again on Birmingham — perhaps in a manner which is paralleled only by the publicity received during our racial strife of earlier years
But it must be clear that the cause of our attention today, my election, is a clear indication of our progress in human relations. As a resident of this city and one privileged to serve in city government for the past eight years, I know that the Birmingham of today is very different than the Birmingham of yesteryear which was wracked by racial strife.

Although there is still work to be done to improve race relations and to bring about full racial justice, we no longer deserve the image of the Birmingham of the early '60s.
Our record of hard work for biracial communication and cooperation has earned for us a new image which this occasion today underscores. For 10 years in Birmingham, blacks have served with whites in city government and today blacks sit on all decision-making boards of the city government.
A significant number have been chosen to provide leadership for these boards. Even though I am aware of the racial pattern of voting in the mayor's election, the uneasiness which this political transition creates in many of our people and the need for me as mayor to reassure all of our people by my actions that this is but another significant chapter in our history of progress, I want to make it clear that I do not view this election or its results as the onset of a new period of racial cleavage or polarization.

I go into office today with a deep commitment to continuing the progress of recent years, to building upon those foundations laid by recent mayors of this — mayors like George Seibels, who shares this platform with me today, and my predecessor and good friend, David Vann, whose long years of progressive work and dedication to this city are known and appreciated by all.

Under my administration, Birmingham will continue its progress.

In what is a critical and highly competitive time for our city, I pledge to implement programs which will refine management and accountability in city hall, revitalize our downtown, improve neighborhood revitalization and stability and reduce citizens' fear of crime. At the same time, I pledge to seek ways for intergovernmental cooperation with other units of local government.

I will work for and with all the people of this city — our citizens, our business community and our city employees — to build an even better city. I only ask your cooperation in this endeavor. I know where we are, where we've come from and where we have yet to go as a city.

I welcome the challenge as great as it is.

In closing, I want to mention two of many fine letters I received from members of my daughter's eighth grade class at Glen Iris this past week.
One young lady wrote: "I'm glad that you won. I wish Parsons would have won, but you'll do. I wish you luck."
A young man wrote: "Our class congratulates you on your victory. All I want from you is your best."
I believe that the citizens of this city deserve my very best as their mayor.
I will give them nothing else.