The A. D. King residence is a house located at 721 12th Street Ensley which served as a parsonage for First Baptist Church of Ensley. Notably it housed the family of Pastor A. D. King, brother of Martin Luther King, Jr, from 1961 to 1965 while he led that congregation through the midst of Birmingham's Civil Rights movement conflicts. 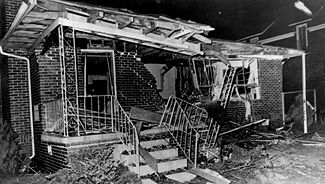 Because King was prominent leader of the movement his house was targeted by Ku Klux Klan terrorists. The house was badly damaged by a pair of bombs set off on the evening of May 11, 1963, the day after an agreement to release jailed protesters and desegregate downtown businesses had been announced, ending the so-called Birmingham Campaign which Martin Luther King had come to support.

As he was preparing a Mother's Day sermon for the next morning, A. D. King's instincts led him to shepherd his wife, Naomi, and five children out of the back of the house just as the first of two bombs at the front of the house exploded. The bombing, which was rumored to have been carried out with the knowledge, or even the participation, of Birmingham police, drew a crowd of almost 2,000 angered residents. A few of them turned to violence, throwing rocks at a policeman and a patrol car. Reverend King picked up a bullhorn and urged the crowd to disperse peacefully. After another bomb damaged the A. G. Gaston Motel later the same night. The era's most destructive riot took place downtown.

The church repaired the brick-clad house, moving the porch to one side in the process.

The church put the former parsonage up for sale in 2006. Omie Crockett, a former deacon, made the decision to purchase it in order to preserve the home's history. He received support from fellow deacon Erskine Lewis and the Village Creek Society, headed by John Meehan.

Through their joint efforts a plaque recognizing the building's historic importance was installed on the front wall in August 2007. In 2008 the home was recognized by the Jefferson County Historical Commission, the Alabama Register of Landmarks & Heritage and the National Register of Historic Places.